We have 1 month left in the 2021/2022 regular season and we have been through a lot already. Derrick Henry was a strong candidate for the award, then we saw Kyler Murray making a move and it looks like the NFL MVP will once again be a quarterback.

Our experts will look not only at the statistics that the favorites are posting but we also want to see the overall performance of their teams. While the MVP award is a solo accolade on paper, it is actually a reflection of how the team performs and where it ranks in the NFL.

The list above is the measuring stick we are going to use to rank our NFL MVP candidates. None of the names on the list will surprise you but we got a couple of dark horses anyway.

Tom Brady is currently the favorite to snag home the MVP award and why wouldn’t he be? He leads the league in most ‘’flashy’’ passing statistics (1st in passing yards, 1st in Touchdowns, 1st in sacks per snap). The guy is 44 years old, and he still has the quickest release in the NFL – 2.18 seconds per pass. You can’t sack him.

Add to this the fact that the Bucs are 9-3, have complete control over their division and are in the mix to win the 1st seed in the NFC. What’s worse for everyone is that December and January are Brady’s favorite months to play football. Holy cow!

Previous rank: on the bubble

Rodgers made the biggest leap of all MVP candidates as he moved in the top 3 over the past month. He battled an illness, then a broken pinky toe but his team continues to win. The Packers also have an easy schedule all the way to the end. Rodgers completes 66.2% of his passes and already has 3 rushing touchdowns to his name in addition to the 23 passing ones.

The Packers are also a very serious Lombardi Trophy contender, so Rodgers has a chance to win the MVP award in back-to-back years. 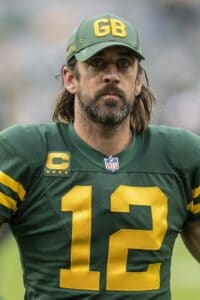 Previous rank: on the bubble

Murray is the 3rd ranked player in the MVP race although we don’t completely agree with that. While the ‘’Road Runner’’ is still running all over defenses, it has to be pointed out that he missed 3 games this season and his team went 2-1 in that span. It is difficult to say whether he is the key to the immense success that the Cardinals are having or if the coaching staff is to be credited.