Without a doubt, the most attractive part of football to the majority of young fans is the passing game. When a ball flies 55 yards for a touchdown or after a tight throw between two defenders, fans are usually ecstatic. For us to see more such plays, we need excellent receivers with sure hands and vicious route running. The 2021/2022 season has been good to us in that department and we will now look to rank the top WRs in the NFL. 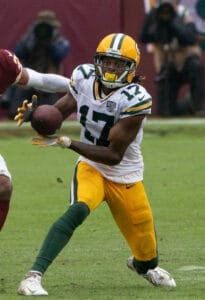 This is the guy who benefited the most from QB Matthew Stafford joining the Rams. Kupp is near the top in each receiving category this year and has been Stafford’s favorite target. Kupp leads the league in receptions (113), yards (1,489), and touchdowns (12). The wide receiver is on pace to beat Calvin Johnson’s record of 1,947 yards in a single season.

Adams is still perhaps the most talented all-around receiver in the NFL currently. His route running and sure hands have made him the best target for Aaron Rodgers. His stats are not the best in the league, but we have to account for the fact that he sat out 2 games this season. Devante Adams ranks 5th in receptions this year but he is 3rd in yards which puts him at 12.10 yards per reception.

Jefferson makes our list primarily because he is a young stud who will be around for many years to come. The fast winger is second in receiving yards this season only behind Cooper Kupp. The former currently has 1,288 yards. However, he is 8th in touchdowns with 8 which is remarkable for a sophomore player in the league.

Speaking of young guns, Chase is as fresh as they come. The rookie wideout is having a tremendous inaugural season in the NFL. He would have been higher on our ranking had we published this article about a month ago. Chase is currently 4th in touchdowns, and he was on pace to beat the rookie record for receiving yards in the league. However, over the last 6 games, he has accumulated only 281 receiving yards and has slowed down a little. Still, his 10 touchdowns of the year are an impressive achievement.

Hill has gone over 100 yards receiving in a game 3 times this season. Still, he has provided plenty of support to quarterback Patrick Mahomes throughout the year and it feels like he’s been the one to make every clutch catch for the Chiefs. Hill is 4th in receiving yards and 5th in touchdowns this year. Given the fact that the Chiefs have fewer weapons on offense this season, Hill’s achievements matter more than usual.

Godwin has a WR 2 status on paper, but he is 3rd in the league in receptions. He isn’t just a safety valve for QB Tom Brady because he is also 6th in yards (1,054). Godwin may be the key to the passing success of the Bucs with so many weapons on the field. Who will sign Odell Beckham Jr. after this season? Updated 2021 NFL MVP Race: Who will win the award? Who will win the Super Bowl this season?