NFL seasons are long seasons and folks are quick to jump to conclusions in late September/early October. Needless to say, weeks 6,7 or 8 are too early in the year to give out verdicts on teams being bad or promises that certain teams are Super Bowl-bound. 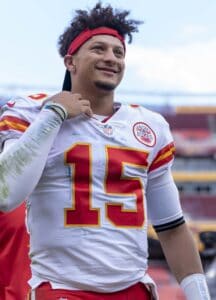 How did the 2021/2022 regular-season start for the KC Chiefs and Patrick Mahomes?

Many people, including some staff members on our team, counted the Chiefs out early on. After 5 weeks, the team was 2-3 and plenty of folks were doubting they will even make the playoffs.

Then, things didn’t necessarily get better as after week 8, the Chiefs were 4-4 with some pretty challenging games on their calendar.

What happened after week 9 for the Chiefs?

Green Bay didn’t have their superstar quarterback Aaron Rodgers for the week 9 matchup against the Chiefs. The Packers lost a 13-7 game which really somehow shot the Chiefs up in the sky. Kansas City won the next 6 games making it a 7-game winning streak and usurping the 1st seed in the AFC West.

The team finished the season with a 12-5 record and just missed the 1st seed in AFC allowing the Tennessee Titans to grab it.

In the first 8 weeks of the season, Mahomes threw for 19 touchdowns. This doesn’t look bad but for that same duration, he also had 10 interceptions. This, on the other hand, is atrocious.

His week 9 game against the Packers was also not something you’d show in highlight reels for the rest of time. Mahomes threw for just 166 yards and 1 touchdown. The Chiefs were at home but as we already mentioned, barely won at home 13-7 against Jordan Love – the backup QB for Green Bay.

And then, something happened to that Kansas offense, and it all clicked. For the second half of the season (9 games) Mahomes threw for 25 touchdowns and only 4 picks. This ranked him 1st in the league in those metrics for the last 9 games.

Where does Patrick Mahomes rank in most stat categories for the 2021/2022 season?

As seen from the stats below, had Mahomes had a halfway decent 1st half of the season, he would have most likely been first in most of these categories.

Can the Kansas City Chiefs win Super Bowl LVI with the help of Mahomes?

The short answer to this question is ‘’Yes’’. Do we really need a longer one, anyway? After beating the Buffalo Bills and Josh Allen in the Divisional Round, The Chiefs are looking ready for a rematch against the Bengals at home. They are heavily favored so don’t be surprised if Mahomes makes his 3rd Super Bowl.