The NFL 2022 draft is now in the books and all the talking heads already started analyzing the picks. What we want to do here instead is look into the most surprising NFL 2022 draft picks and try to determine whether some gems were found in the mud.

The draft started on April 28th in Las Vegas and ended on April 30th. It’s a 3-day thing with round 1 taking place on the first evening, rounds 2 and 3 happening the day after and finally, 2022 draft round 4, 5, 6, and 7 all being conducted on the last day.

NFL draft Surprise Number 1: We almost had a 1st round without any quarterbacks drafted

Only 5 drafts since 1930 have seen a first round go by without a quarterback being selected. This year it almost happened but the Steelers drafted Kenny Pickett with their 20th overall pick in the 1st round. Other QB prospects such as Malik Willis and Matt Corral had to wait until day 2 in order to be drafted by NFL organizations.

Detroit probably got the best defensive player in this year’s draft but it seems like they also landed the best wideout too. They gave up their 32nd, 34th, and 66th pick in exchange for Number 12 and 46 from division rival Minnesota Vikings. The move actually isn’t at all bad for the Lions but it leaves us thinking that Minnesota probably didn’t get the best out of that deal. 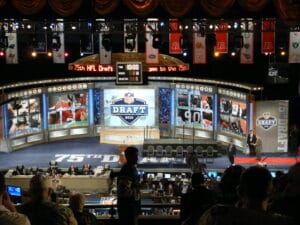 Yep, the choice of words is not random. It was strange seeing Mr. Strange go with the 29th overall pick. Still, looking at Chatanooga’s O-line film, it appears that Cole Strange is an NFL-ready lineman with the ability to also snap the ball. He is very good at run blocking and gets very good angles when blocking in space.

He was expected to go in the late second – early third round, but Patriots coach Bill Belichick explained that he didn’t expect Strange to be available for much longer after the end of the first round.

Best Round 1 award goes to… the Baltimore Ravens

The Ravens had 2 picks in the 1st round and really landed studs with both of them. Safety Kyle Hamilton could be among the best defensive backs in the draft and is widely considered to be a top-10 prospect. The Ravens got him at 14.

With their 25th overall pick, Baltimore picked a player who will anchor their offensive line for years. It was center Tyler Linderbaum. It appears their other picks were pretty good too. In the 4th round the Ravens have not two, not three, but four picks. They used them on a corner, an OT, a TE, and a punter.