We are used to seeing mainly quarterbacks snatch the regular-season MVP award in the NFL and this is obvious just by throwing a quick glance at the historical numbers. Over the last 10 years, we have seen a running back interrupt the line of quarterbacks crowned with the award only twice. It happened in consecutive years (2011 and 2012) when Adrian Peterson was the recipient.

Peterson was indeed a once-in-a-lifetime athlete and simply jumped out of the screen when you watched him go. We are at a point now where we are witnessing another such force at the running back position dominating the league. It is Derrick Henry of the Tennessee Titans.

The 2015 Heisman Trophy winner has been nothing short of remarkable in the last few seasons and it is only normal for the football world to finally consider him for the most valuable player award.

After 7 weeks in the 2021/2022 regular season, Derrick Henry leads the league both in rushing attempts and rush yards. And now the remarkable stats follow.

Henry has 869 rush yards and second on that list is Jonathan Taylor with…well, 579 yards. Henry has got nearly 300 more rushing yards than the second player on the list. With the touchdowns, the picture isn’t all too different either. King Henry has 10 rushing TDs and James Conner who is 2nd currently has 6.

We have surely put in perspective the dominance that Henry has imposed over the other running backs in the league and the fact that he is in a category of his own. 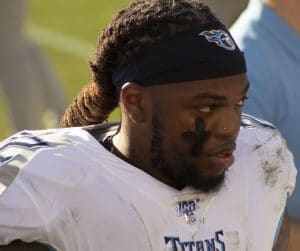 But is King Henry better than the quarterbacks?

This is a tough question to answer because the stats and the rankings are different. What we know is that stat-wise, the 45-year old legend Tom Brady is perhaps the best QB in the league right now. He’s got 21 touchdowns (1st), only 3 interceptions, 2275 yards (1st) and his team are 6-1. It is indeed true that the Tampa Bay offense is just too good right now.

But an argument can be made that Derrick Henry is the offense for the Tennessee Titans. He averages 145.5 all-purpose yards per game and the Titans average 382.4 yards per game this season. This means that The King alone is accountable for 38% of the offensive output for his team. Again, this is not a quarterback but a running back.

The receiving corpse of the team isn’t all that impressive. The Titans average 21.4 passing completions per game and Henry carries the ball 27.2 times a game. Julio Jones and AJ Brown combine for a total of 655 receiving yards and 2 touchdowns for the season so far. They are the two main weapons in the passing game and the boost they have provided so far is minimal.

Oh, yes and we forgot to mention that Arthur Smith, the man behind the 2020 offensive explosion for the Titans is no longer there. Still, the team currently sits at 5-2 after blowing the doors off of the Chiefs on the road with a score of 27-3.