Had you asked us 4 months ago about who’d face off in the divisional round of the AFC playoff bracket we might have said Buffalo Bills vs Kansas City Chiefs and we would have been right. The other pair, however, turns out to be an unlikely one.

We can’t help but think that the Titans may not have what it takes to make it to the AFC Championship game, but we have to admit that this may be recency bias. We haven’t seen them play a meaningful game in a few weeks and we literally just witnessed how good Joe Burrow and Ja’marr Chase are.

Furthermore, we have been doubting the Titans ever since Derrick Henry went out with a foot injury. Tennessee has done nothing but prove us wrong over an over again. And now, The King will be back! 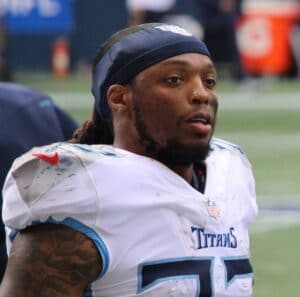 How much does Derrick henry matter to the Titans’ playoff success?

If you have the most powerful back in the league on your team how important is he? The answer is… a lot. Mr. Henry has been out since week 9 of the 2021 regular season which means all other running backs in the league have had 10 weeks at their disposal to pass him in stats.

However, King Henry finished the season with 937 rushing yards which ranks 9th in the league. The guy has been out for more than half a season and 70% of the league’s running backs could not pass him in yards. Rushing touchdowns? Derrick Henry ranks 7th in that category among running backs.

Does Ryan Tannehill of the Tennessee Titans play better or worse with Derrick Henry on the field?

We think at this point you can guess the answer to that question. We are raising this question because the games that the two players have been in together are almost equal to the ones they haven’t.

Who wouldn’t want to have Derrick Henry back? He obviously opens up the whole offense for the Tennessee Titans.

Have the Titans changed their offense in Henry’s Absence?

The short answer is: no, they haven’t. They are still a running offense and yes, the numbers tell us that. Henry rushed for 937 yards on 219 attempts and without him, the Titans have managed to reproduce his efficiency – even slightly better. The team has rushed 193 times and has managed to gain 908 yards. Henry got 4.3 ypc and the rest of the team has 4.7.

The three remaining running backs on the team (Foreman, McNichols, and Hilliard) have broken 22 runs for 10 or more yards while Henry himself managed to break 20.

All in all, we are expecting to see the same football by the Titans, only with more intimidation provided by Derrick Henry.