The 2021/2022 season is over for the New England Patriots after the trouncing they took at Orchard Park on Saturday evening. This is the type of game that you needn’t analyze because the box score really tells the whole story. Final score: 17-47.

New England couldn’t get anything going for them and quarterback Josh Allen was in complete control of the whole game. Allen threw for 5 touchdowns, 0 interceptions, rushed for 66 yards, and had a QBR of 98.5.

The New England defense allowed 482 total yards and 47 points in this one. It makes you think if this team ever had it going for them during the year. Yes, we know there was a 7-game win streak but after their bye week in week 14, the Pats lost 4 out of 5 games and are now on their way to Cabo. 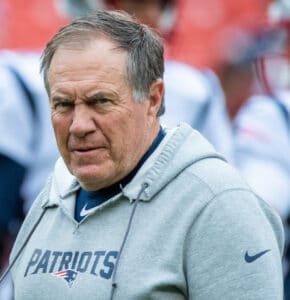 Will the New England Patriots be better next season?

It all depends on the roster moves that the team will make, but it is hard to imagine that they will splash the free-agent market the way they did in 2021. Bill Belichick spent $163 million on free agents and this action yielded some results.

The team managed to bounce back after missing the playoffs in 2019/2020. A good portion of the credit has to go to players such as Matthew Judon and Hunter Henry who were among those that got signed as free agents.

However, the Patriots’ defense is far from being very good as visible from the Bills Wild Card game. Players such as Dont’a Hightower, Kyle Van Noy, and Devin McCourty not only didn’t have their best games but may very well be gone next year.

There’s this notion that the Patriots are a young and fresh team now, but they aren’t. In truth, New England ranks as the 5th oldest team in the league with an average age of 26.5. It looks like they will be looking to get at least 5-6 starters on defense next year. After possibly franchise tagging JC Jackson, the money that remains also is not going to be a lot.

Do Patriots fans have anything to be excited about?

Of course, they do. This season is over they may have an early playoff exit next year too, but the Patriots have such a culture that allows them to be a serious team each year.

Quarterback Mac Jones played like a very good rookie this season, but still a rookie. The guy obviously knows how to play the game and the team will count on him to improve over the off-season and come back ready to go. We need to see what Jones’ ceiling is in order to make a conclusion on him.

Other bright spots on that team are DT Christian Barmore, S Kyle Dugger, WR Kendrick Bourne, and TE Hunter Henry. This offensive line is also in good shape and they have gelled well.

What will Belichick do in the off-season?

The main challenge in front of Belichick this offseason is to put a good defensive product on the field because if they keep being run over the way they were by the Bills, nothing good will happen in New England