The Hail Mary pass is one of football’s most magical plays. It’s an intoxicating feeling for both players and spectators. Teams on the verge of agony and defeat are instantly celebrating the thrill of victory.

Here are five of the most dramatic Hail Mary passes in NFL history:

The Rodgers-to-Rodgers connection occurred on Dec. 3 at Ford Field and is dubbed “The Miracle in Motown.”  Green Bay quarterback Aaron Rodgers avoided a trio of Lions pass rushers for nearly ten seconds before throwing a 66-yard Hail Mary pass to a quartet of Packers pass-catchers in the end zone. Tight end Richard Rodgers leaped and caught the ball to give the visitors a stunning 27–23 victory. The play is the longest game-winning Hail Mary in NFL history, and both Rodgers received the Best Play Award at the 2016 ESPY Awards.

Football is a game of inches, and a classic Hail Mary touchdown pass on Nov. 20 proved the adage correct. Atlanta quarterback Steve Bartkowski launched a pass 47 yards on the final play of the game that receiver Billy “White Shoes” Johnson caught off a bounce before getting tackled at the one-foot line. However, the referee ruled that Johnson had put the ball over the goal line before his left shoulder hit the ground. The play the Falcons ran was called Big Ben Left, and it is one of two Hail Mary passes Atlanta has completed against the 49ers.

The Buffalo Bills took a 30-26 lead over the Arizona Cardinals with 34 seconds left in the game on Nov. 15 at State Farm Stadium in Glendale, Arizona. The Cardinals rallied behind quarterback Kyler Murray, and with 11 seconds remaining on the clock, the Heisman Trophy winner tossed a 43-yard pass into the end zone that wideout DeAndre Hopkins outleaped three Bills defensive backs for the game-winning score.

The play was dubbed “Hail Murray” and captured the 2020 NFL Play of the Year Award. The play was also the first go-ahead Hail Mary touchdown in the fourth quarter of a regular season game since the Miracle in Motown in 2015.

The ‘Miracle at the Met’ took place in Week 15 of the 1980 NFL season at Metropolitan Stadium. The Vikings trailed the Browns 23-9 in the final quarter but rallied late to make the game a nailbiter. Still trailing and with time left for just one more play, Minnesota quarterback Tommy Kramer heaved a 46-yard pass on a play called “Squadron Right” that Ahmad Rashad caught with one hand as time expired to give the Vikings a 28–23 victory.

Kramer had a monster game and passed for 456 yards in the improbable comeback win. The victory clinched a playoff berth for Minnesota, who lost to the eventual NFC Champion Philadelphia Eagles.

Minnesota was the two-time defending NFC champions and sported a 12-2 regular season mark, while Dallas squeaked into the playoffs. The Vikings forged ahead late in the fourth quarter of NFC Divisional Playoffs when Brent McClanahan broke a tackle to get across the goal line to the delight of Minnesotans at Metropolitan Stadium. However, legendary head coach Tom Landry and the Cowboys had one ace left up their sleeve.

Dallas converted a 4th-and-16 on a Roger Staubach pass to Drew Pearson to keep the Cowboys’ faint hopes alive and set the stage for the original Hail Mary touchdown pass. With 24 seconds left in the game, Dallas was at midfield when Staubach pumped-faked a throw to his left and then threw a 50-yard game-winning touchdown pass to Pearson. NFL Playoff Scenarios for Week 18: Which Teams Can Make The Playoffs This Weekend? 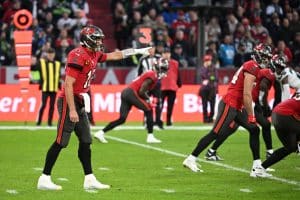