This is a question that most horse racing fans wonder about, and there is no simple answer, in all honesty. Sure, being a jockey can be an incredibly rewarding and lucrative career – at the very top. But it can also be a struggle for all those that don’t quite make it into the elite group, which is where the answer gets a little interesting. We will be investigating all of the ins and outs throughout this quick read, and some of the facts/figures might just surprise you! So, first and foremost, let’s explain one of the common myths surrounding being a horse racing jockey – salary vs wages. This will help to create a general overview to answer your question of how much do jockeys make, so let’s get started.

To give you the most direct answer, there is no horse racing jockey salary, much like there isn’t with other sports that are based solely on prize money. Sure, there are a number of exceptions for sports like football, rugby, and other team events, but this certainly doesn’t spill over into the world of being a horse jockey. This world is truly performance-based, so even using the term ‘wages’ isn’t strictly appropriate, as no jockeys are paid a wage in the traditional sense. However, up until this point, we have been talking from the perspective of performance, but there is a whole other area to think about – specifically for the top jockeys.

As and when a jockey reaches the top of the game, they can indeed receive what would be viewed as jockey wages, but it’s not paid out through an employer. Instead, it’s received in the form of sponsorship deals. Just look at guys like Frankie Dettori, he has sponsorship deals left, right, and centre these days – and he will be making a fair amount of money from it. This is where you might hear that these guys receive a jockey salary, and specifically for Dettori, he has deals with Playtech for his own online slot game, Sporting Index (a new online betting site), and many others.

Obviously, he will be paid a premium for aligning his name and legacy with these brands, but the remainder of his income is based on his performances. 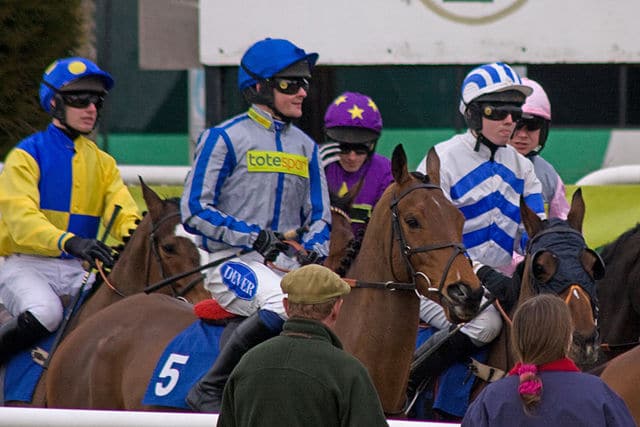 Now we are getting into the juicy information, what the top jockeys are able to earn compared with the rest of the field. Firstly, we should probably mention that all jockeys receive a fixed rate to ride certain races, but it isn’t very high. In fact, it’s often less than $200, which means that the jockey would need to race all day to make a respectable daily figure. But this doesn’t always concern the very best, as they are able to redeem anywhere from 8.5-9.0% of the total prize purse for that race. Let us tell you now, this can add up remarkably quickly should these jockeys win major events! On top of this, jockeys will often receive retainer payments from the world’s richest trainers/owners, largely because these guys want to ensure that the very best are available to help them come race day.

These retainers can often be deep into the six and even seven-figure regions for certain events, although exact figures are rarely disclosed. With all of this combined, when you look at the rich list for the top jockeys in the world, the numbers are quite extreme. Essentially, every single rider that ranks inside the top 10 has amassed millions in prize money, and even though the owners of the horse will then take a significant cut – the jockeys are still raking it in!

Take John Valasquez as a prime example, during his career he has won six Triple Crown races, and accumulated more than $400 million in prize money, aand he isn’t even at the top of the leaderboard.

Now we’ve talked about the dizzying heights of being a world-renowned jockey, let’s come back down to Earth – with a bit of a bang. By now you know that the very best jockeys are earning megabucks, but where does this actually leave the rest of the pack? Sadly, the rest of the pack are earning average money at best. Looking at figures that have recently been released by a major horse racing authority, a jockey salary in the UK tends to float around the £27,000 (around $35,000) region – which is pretty much the average salary that you’d get at a regular job in the UK. And let’s not pretend that the job is plain sailing either. Being self-employed, jockeys will be responsible for travel, accommodation, and all of the training in-between to be raring to go come race day.

It’s certainly not for the faint of heart, and since these jockeys are not what we would describe as high-profile, there is no real shot at retainers or sponsorship deals, not in the same league as the elite, anyway. So when all is said and done, sure, it’s somewhat interesting and unique to be a jockey for a career, but lucrative? We can’t say that it is unless you plan on being the very best in your jurisdiction.

How much do jockeys make? Our conclusion

Throughout the information above, we’ve discussed the highs of being a leading jockey, as well as the struggle of being just another fish in a rather big pond. While yes, we won’t hide the fact that being a jockey can be incredibly financially rewarding at the very top, life can also be quite a struggle to get there – with no guarantee that you’ll ever make it into the top flight. And since almost all jockeys are self-employed, there is no safety net of things like jockey wages or a jockey salary to provide at least some degree of comfort. It’s a dog eat dog world in this game, and to truly make it, you must be relentless. Then again, once a jockey does make it to the very top, we’d imagine things can be rather magical!