If you’ve ever heard of the famous ‘Triple Crown’ in horse racing, you are probably quite curious as to what this term means and what it entails. If you’re familiar with horse racing, you’ve probably got a reasonable idea already, but if you are still just testing the waters with this sport – it’s understandable to feel a little lost. Therefore, we figured we’d give you an explanation of the three Triple Crown races, as well as what each race entails, and what makes them so special. There’s quite a bit to get through, so without wasting any more time, let’s kick things off with our first of the three races.

A breakdown of each of the Triple Crown Races

As you’ve no doubt guessed from the brief introduction above, the Triple Crown consists of three different horse races in North America. The first is run at the start of May, the second at the end of May, and the final race is run at the start of June. Each of these races makes up the prestigious ‘Triple Crown’, and each race is solely open to three-year-old thoroughbreds. While each of the races you see below was established at different times, they were bound together with the title of the Triple Crown in 1950. With that said, let’s get into the first race right now. The Kentucky Derby, also nicknamed as ‘the run for the roses’, is the first of the Triple Crown Races. This blockbuster race usually sets the stage for the entire season, and it is run in Louisville, Kentucky – which is why the support is always so loud and cheerful! In terms of the structure of the race, it is run over a distance of 1.25 miles at the Churchill Downs Racetrack, and the race has taken place at this course ever since 1875. This might seem quite a long time ago, but this actually makes the Kentucky Derby the latest of all the three races to enter the racing calendar. And if you’d like a quick bit of history, the race used to be run over a distance of 1.50 miles, before it was then cut back to the distance we all know today.

And as you may have guessed, in order for any horse to win the Triple Crown, the horse must win the Kentucky Derby to be in with a shot. This adds a nice bit of spice to the race, and it’s always one that horse racing enthusiasts love to watch!

The Preakness Stakes was established in 1873, just two years before the Kentucky Derby opened its doors to professional racing. But no, this race is still not the oldest of all of the Triple Crown races – it is simply the second oldest. With that said, there are a few categories where the Preakness Stakes steals the records. Firstly, this is the shortest of all of the Triple Crown races, being run over a distance of just 1,900m. Secondly, this race also has the smallest field of all of the three – with just 14 races being eligible to compete for any given year. As you’d expect given these records, the Preakness Stakes is always an intense affair, and there’s not a whole lot of margin for error.

Now you have got an idea of the speed and history of the race, let’s get into a few specifics. The Preakness Stakes is usually run on the third Saturday in May, and it is held at Pimlico Race Course, in Baltimore, Maryland. This creates a completely different environment and atmosphere compared with the previous Kentucky Derby, but then again, if all races were the same, things would get boring!

The Belmont Stakes is not only the longest of all of the Triple Crown races, but it is also the oldest – dating back to 1867. Not only does this make the race the most traditional, but ask just about any jockey/trainer, they’d likely tell you that the Belmont Stakes is the one that they all want to win. The race consists of 16 horses, and it is held at Belmont Park, in New York State. Of course, this means that the Belmont Stakes has that typical New York vibe about it, with plenty of welcoming and excited fans lining the track as the horses charge through to the finish. And if you are wondering about the financial incentives for the jockeys/trainers – the Belmont Stakes had a prize purse of $1.5 million for the 2021 event, which is one of the largest we’ve ever seen for horse racing in North America.

Once again, we have a record or two to share with you regarding our final Triple Crown race. Back in 1973, the horse Secretariat managed to run the Belmont Stakes race in a time of 2 minutes and 24 seconds – a time which has not been beaten to this day. Many hail this as the single greatest racing performance of all time, but as the years roll by, we have no doubt that other horses and jockeys will be looking to break this record. 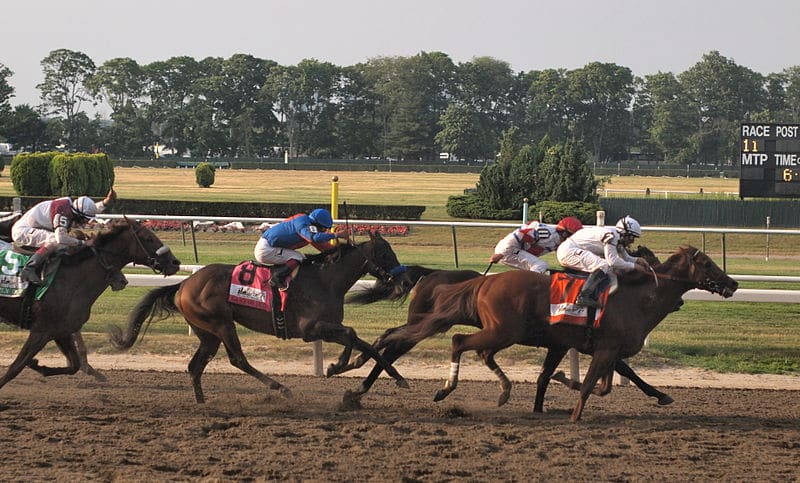 If you love horse racing, you just have to tune in for the Triple Crown events each and every season. Not only are the races sure to entertain you, but the excitement and atmosphere surrounding each of these races is something that you just don’t get with every other sport. And if you love to take a punt or two on such major events, there are always exciting betting markets ready and waiting at the top sportsbooks in North America. But since the 2021 Triple Crown season is now over, you’ll need to sit tight and wait for the 2022 racing schedule to be announced to ensure that you catch all of the action!