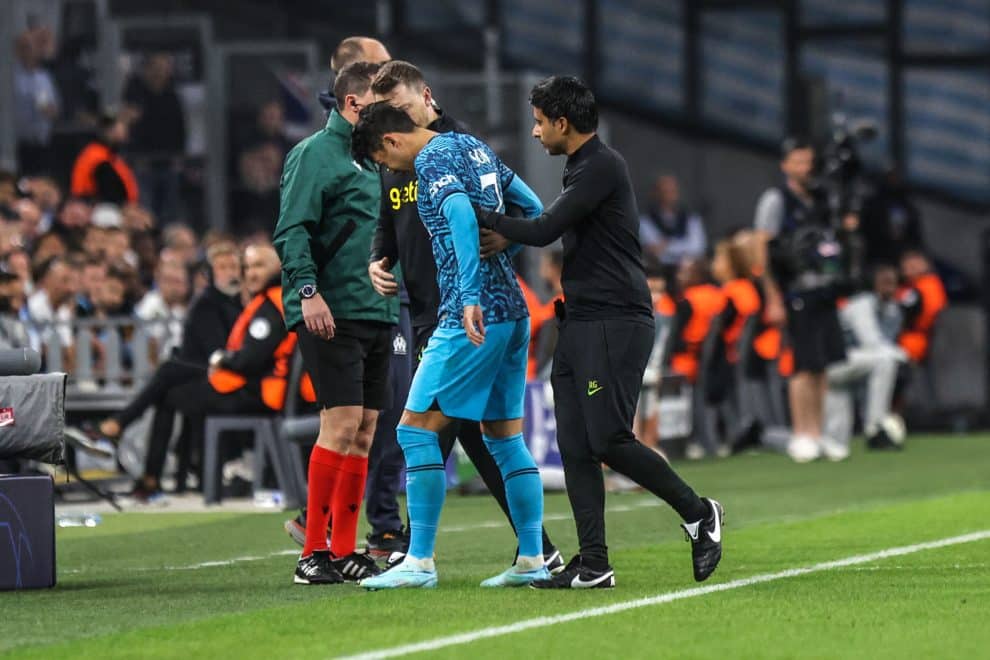 Son Heung-min is expected to recover from his injury in time for the 2022 World Cup, according to Tottenham Hotspur manager Antonio Conte.

As reported by Korea JoongAng Daily, Conte has confirmed that Son is out of hospital and is currently recovering from the eye injury suffered against Marseille.

The South Korea international required surgery on his eye socket after a coming together with Chancel Mbemba in the recent Champions League meeting in France.

Son was forced off at the half-hour mark with his eye heavily swollen. Spurs went on to win the game 2-1 to secure top spot in the group.

The Korea Football Association confirmed on Saturday that their star man successfully underwent surgery on the injury.

Spurs travel to Nottingham Forest on Wednesday for a League Cup third round tie. They then host Leeds on Saturday in Premier League action.

Speaking after Sunday’s loss to Liverpool, Conte remained upbeat about Son’s chances of returning in time for the tournament in Qatar.

“I sent him a message yesterday after the surgery and Sonny was really, really disappointed for this situation but I hope for him he will recover very well and play in the World Cup,” said the Spurs manager.

“I was a player and I know the importance of playing in the World Cup. Tonight he was the first person to play this game, for sure he missed us.

“I am confident, confident that he can come back quickly and play the World Cup for South Korea.”

Son is expected to captain South Korea at the 2022 World Cup. The Spurs forward is his country’s most-capped active player. He has 104 appearances to his name, while he is also the top active goalscorer with 35 goals.

Son was among the top goalscorers in Asia 2022 third-round World Cup qualifying. He netted four times, the joint-most alongside five other players.

South Korea have been placed in a very tricky group for the 2022 World Cup. They will meet Uruguay, Ghana and Portugal in Group H.

It remains to be seen whether the Spurs attacker will be fit in time for South Korea’s opener against Uruguay on 24 November. His country then meet Ghana and Portugal on 28 November and 2 December respectively.

Prior to his injury, Son hadn’t been enjoying his best season for his club. The Spurs man has scored five goals in 19 appearances in all competitions.

Three of those have arrived in the Premier League, with the other two coming in the Champions League.

It follows a phenomenal season last time out, where the Spurs attacker hit 24 goals in all competitions. He has set very high standards for his club, and his country will be desperate that he recovers in time for the upcoming World Cup.