Say the name Maksim Tsyhalka and you’ll be met with mostly blank looks. Make a slight adjustment to Maxim Tsigalko and you’ll soon be inundated with tales of goalscoring triumph. One of the greatest footballers you’ve never seen play, Tsigalko is a Championship Manager legend.

The 01/02 version of the popular series is often considered the best. There’s no shortage of “CM Legends” given such status due to the longevity of the game. Still played by a healthy number of people even today, Tsigalko is in good company. Mike Duff, Mark Kerr, Cherno Samba, Taribo West and seemingly every footballer born in Sweden and Greece in the 1980s have gone on to gain cult status thanks to their exploits in the virtual world. As is often the case with management games from this era, for every Robbie Keane there’s a Maxim Tsigalko. It’s hardly surprising, football (or soccer) is more global now than ever and if a player is tearing it up in a league thousands of miles away, there’s a gif of his latest goal readily available within minutes. Back in 2001, there was no such luxury and the word of a researcher was as good as it got.

At least Tsigalko is real. He is often partnered by To Madeira, an equally lethal striker picked up for peanuts from the depths of the Portuguese league. A sneaky researcher added Madeira to the database with incredible stats and he slipped into the final release of the game. For Tsigalko though, he may not be a household name but by the time of the game’s release, he was starting and scoring for Dinamo Minsk. Would that really be enough to secure him world class potential statistics?

Antonio Poutillo is the researcher who regarded the Belarusian as an exciting prospect. Finishing of 20 was immediately a big positive for the striker and coupled with 17 for pace and acceleration, he was all set to be the Belarusian Michael Owen. He’s only 18 when the game boots up too, so he could feasibly be your main man for 15 years if you were so inclined. What’s not to like?

Well, there is one thing. With Belarus not being part of the EU and with no International record to speak of at this stage, getting him to sign for your club was a challenge in itself. Getting a deal agreed with the club and the player weren’t really sticking points, however, a work permit would often prove to be a step too far. You could sometimes trick the meddling AI by setting his status as indispensable and offering him mega wages but sometimes even that wouldn’t be enough. Tsigalko fans would have to pitch up at a league where work permits are not so much of an issue, such as the Dutch league, or do the unthinkable and cheat. Adding a second nationality via the editor is effective but rather unethical! Either way, it would be approximately £900k well spent.

Such is Tsigalko’s standing within the CM community a special challenge has been created for him. Search Twitter for #tsgialko1000 and you’ll it in action. The premise is fairly simple – get Tsigalko to 1000 career goals as soon as possible. Looking at the various screenshots, the record seems to be about 380 games. Those are ridiculous numbers but with the right tactics and a lot of time, why not? Maybe you could be the one to beat it. 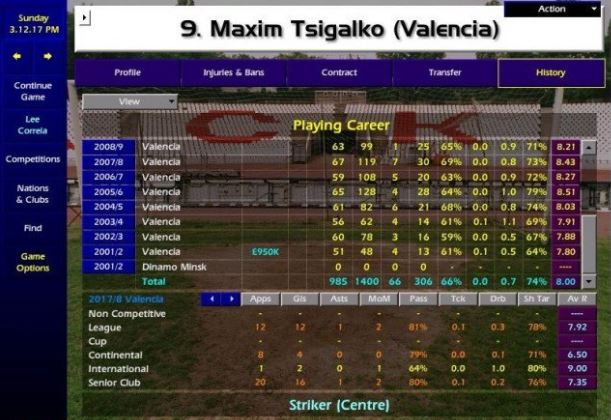 As for the real Maxim, he showed glimpses of his ability at Dinamo Minsk and boasted an almost one in two record. Unfortunately, persistent injuries reduced his playing time and although he did manage two caps for Belarus (scoring once, naturally) his success was all too fleeting. The start of his injury problems began while on trial with Maritimo, suffering a serious knee injury that led to seven months on the sideline.

After leaving Dinamo, he plied his trade for clubs in Armenia, Kazakhstan and his native Belarus before retiring at 26. Upon retiring, Tsigalko was forced to work a low-paying construction job to support his family. Tough working conditions further deteriorated his health and is now unemployed according to his latest interview with Gazzetta.gr.

Like so many of his counterparts, his career is actually very good and accomplished more than most of us will ever achieve in the game. It’s just in comparison to what these players achieved in Championship Manager that it can be seen as falling short – a ridiculous yardstick to measure a player’s career by!

So here’s to you, Maxim. The most lethal striker the world has never seen. You’ve won more golden boots than I own in actual shoe form. You’ve brought joy to millions and have a challenge named after you – sounds like a success to me.

Sadly we’ve heard the news that Tsigalko has passed away on December 24th at the age of 37. His former club Dinamo Minsk posted on Twitter to confirm the news. The cause of his death was not cited. An icon for the Championship Manager community has gone far too soon. Thank you for all the great memories.