Fabinho produced another top display to help Liverpool secure a spot in the Champions League quarter-finals. The midfielder was once again key as the Reds overcame Inter Milan on aggregate.

He chipped in with his usual crunching tackles, smart passes and all-round reading of the game. Inter provided a real threat at Anfield, but Fabinho was on hand more often than not to prevent the danger.

The Brazilian has been a crucial member of Jurgen Klopp’s Liverpool side in recent years. Despite all the attacking talents at the club, he’s undoubtedly one of the first names on the team sheet.

He has even had to play in centre-back and right-back throughout his career, such is his versatility. There is, however, no denying that defensive midfield is his best position. 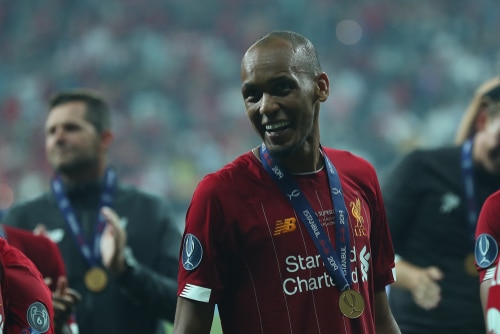 Is Fabinho the best defensive midfielder in the world?

Fabinho carries out the dirty work that other players aren’t willing to do. The Brazilian has been a regular under Klopp since joining from Monaco in 2018.

Since then, his selfless shifts have been respected by Liverpool fans, with the Anfield faithful well aware of how crucial he is to the current setup.

His deep-lying displays allow the likes of Jordan Henderson and Curtis Jones to play how they want in midfield. They can drift forward in the knowledge that Fabinho is sitting behind them, providing an extra layer of defence should possession be lost.

He is also often the out-ball for Alisson, Virgil van Dijk or Joel Matip. The midfielder drops deep to collect possession, and often releases his teammates with a key pass. On occasion, his dribbling skills come to the fore when there is no other option but to drive forward with the ball.

Fabinho has even been an unlikely goalscorer for the Reds in recent times. He has four goals for the season, three of which came in quick succession. The Brazilian has also shown his worth from the penalty spot, not least in the League Cup victory over Chelsea in February.

There are, of course, a handful of other players who would want the title of the best defensive midfielder in world football.

Inter Milan’s Marcelo Brozovic is another who has been at the top of his game for some time now. And the same can be said for Barcelona legend Sergio Busquets, who remains a key player for the Catalan club.

Monaco youngster Aurelien Tchouameni has also been attracting a lot of attention for his performances. New Juventus man Denis Zakaria is another to shine in the role lately.