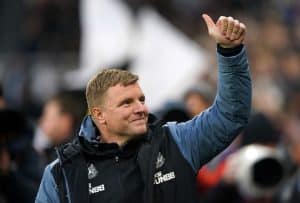 Second-half goals from Dan Burn and Joelinton put Newcastle into a comfortable position against a lacklustre Leicester outfit, and that quick-fire brace allowed United to reach the last four of the Carabao Cup with a energy to spare.

25-year-old Brazilian Bruno Guimaraes was a key performer in the middle of the pitch for Newcastle and the schemer pulled the strings from deep on another thrilling evening in the northeast.

Speaking to Sky Sports after Newcastle’s victory over Leicester, Howe namechecked Bruno Guimaraes as one of his team’s best players, saying, “He’s a hugely important player for us.

“He’s an unbelievable technician, he takes the ball anywhere, but he also has a real grit and determination off the ball as well.

“He’s been a real game changer for us.”

Bruno Guimaraes’ pinpoint distribution allowed Newcastle to dominate proceedings against a makeshift Leicester team that was ravaged by injuries and the South American completed 84% of his attempted passes against the Foxes.

Guimaraes might have added his name to the scoresheet for the Magpies had he had more luck with his four efforts on goal on the night.

Several other Premier League clubs ran the rule over Guimaraes when he was plying his trade with Lyon in France, however, while some had hesitations over the 25-year-old, Newcastle took the plunge, spending approximately £40m to bring him to England in January last year. The talented technician has been a huge hit with the Magpies faithful ever since. 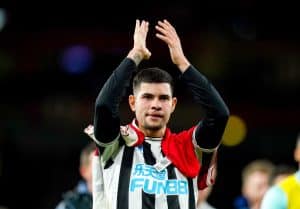 With their passage booked to the semi-finals, Newcastle supporters are already dreaming about winning their first piece of major domestic silverware since 1955, though excitement should be tempered for the time being with a tricky test potentially on the cards in the last four.

Manchester United eased to a 3-0 win over Charlton in their quarter-final tie at Old Trafford yesterday evening and the Red Devils could be next up for Newcastle in the Carabao Cup if the draw falls in that direction.

On Wednesday, Nottingham Forest and Wolves will face off for a spot in the semi-finals, while Southampton and Manchester City will contest the remaining quarter-final tie at St. Mary’s Stadium.

If results go according to form, both Manchester giants would be in the hat for the semi-final draw and Newcastle will hope to avoid playing either side in a double-header.

Newcastle have faced both United and City in the Premier League this season, holding both teams to draws, however. The Magpies traded blows with City in a pulsating 3-3 draw at St. James’ Park back in August, before they frustrated United at Old Trafford in October in a 0-0 stalemate.

Manchester City – who have won the league cup six times since 2013 – are the favourites to go all the way again in 2023 at 5/6, with Manchester rivals United next in line at 5/2.  Newcastle are outsiders at 9/2 to win the Carabao Cup outright this season.