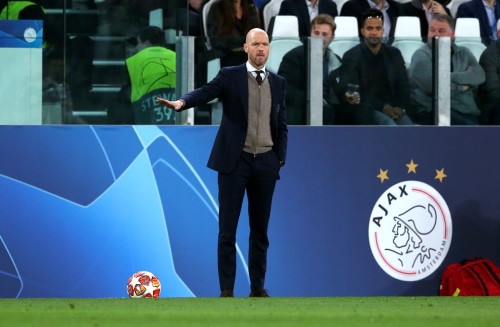 Erik ten Hag is strong favourite to take over as Manchester United manager this summer.

The Ajax manager has been impressing in the dugout this season. The Dutch outfit currently sit top of the Eredivisie. They are two points clear of PSV, having lost just three games in the current campaign.

More impressive, however, has been their statistics under ten Hag. The club have scored 80 goals from their 27 matches, conceding just 13.

And it was a similar story in Europe, before their Champions League venture came to an end at the hands of Benfica in the round of 16.

They topped a group containing Borussia Dortmund, Sporting and Besiktas. The Dutch outfit won all six of their matches, scoring 20 and conceding just five.

Ajax boss Erik ten Hag has rightfully gained much of the plaudits for the season so far. Should the manager make a switch to Old Trafford, he could certainly bring some of his talented players with him.

Here are four players that could potentially move from Ajax to Manchester United:

22-year-old Antony has been in fine form this season. The right-winger boasts 12 goals and 10 assists in all competitions. Still in the early stages of his career, the Brazilian is only going to get better with time.

At Man Utd, Jadon Sancho is certainly becoming a key player on the left. One can only imagine just how dangerous the Red Devils would be with Antony on the other side. He is rapid and direct, with a super left foot capable of doing damage when cutting inside.

At just 19, Gravenberch has already gathered a huge list of potential suitors. Bayern Munich reportedly lead the race, so Man Utd certainly have a challenge on their hands if they are to persuade the youngster to come to Old Trafford.

Capable of starring in central midfield or defensive midfield, he may just be the exact player Man Utd need in order to sharpen up in the middle of the pitch. Their struggles in defensive midfield are well documented. Moreover, Paul Pogba could go this summer, leaving an unwanted gap in that area.

If a move for Gravenberch is too optimistic, United supporters needn’t worry. His defensive midfield partner Alvarez is a suitable backup option. The 24-year-old has been a regular in the heart of the Ajax midfield in recent months.

The Mexican is lively, and certainly has an eye for a tackle. United are in desperate need of such characteristics. Moreover, the Mexican is more than capable of slotting in at centre-back if needed.

The Manchester outfit could also do with reinforcements at centre-back. Raphael Varane certainly has the quality to keep goals out, but many fans strongly believe that Harry Maguire is not the player to play alongside him.

Timber, another product of the Ajax youth academy, could be exactly the kind of player needed at the back. Just 20, the youngster is already a member of the Netherlands international setup.