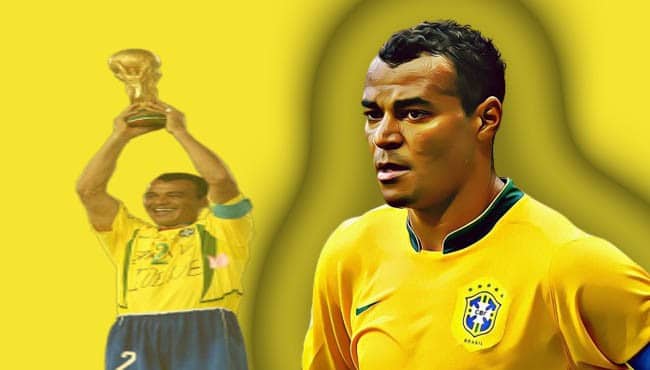 The full-back might be one of the difficult positions on the pitch, as a good contribution is required in attack and defence. The expectation out of a fullback goes up even higher when playing in one of these positions for the Brazilian national team. While there were huge expectations of Marcos Evangelista de Morais, better known as Cafu, when he made his professional debut for Brazil in 1990, few would have imagined that he would set an exemplary benchmark in a 16-year career with the national team.

Young and making a name

Cafu came through the ranks at São Paulo and went on to make his debut for the Brazilian outfit in 1989. A six-year spell with the Brazilian club soon brought him to the attention of European teams. After a failed spell with Real Zaragoza in Spain, Cafu came back to Brazilian football where he once again rediscovered the mojo at Palmeiras. Now, a second stint to Europe reckoned when Roma came calling in 1997. Since the switch to the Italian capital, Cafu never looked back as he went from strength to strength.

Part of the iconic Brazil setup

There were some shortcomings in the defensive side of Cafu’s game. Yet, these were completely overcome by his brilliance going forward. Fortunately, the defender profited from Brazil undergoing a sea change in terms of their attacking mindset from the 1982 World Cup onwards. Telê Santana brought about a new style of football where the full-backs would be integral in providing the width and offensive push to the team. There would be two central midfielders who would be deployed to protect the two centre backs. This gave the license for fullbacks to push forward without worry and Cafu’s incredible engine allowed him to operate almost as a wingback.

On the other side of the pitch, there was a young and hungry Roberto Carlos who was raiding up and down in a similar fashion. The art of crossing the ball was not Cafu’s forte. Instead, his energy levels and work rate made it easy for him to make overlapping runs with amazing ease. This helped create an overload, which often led to great offensive situations for Brazil.

Despite not being a key member of Brazil during the 1994 World Cup, Cafu featured in the final owing to an injury to Jorginho. From that appearance in the 22nd minute, Cafu never looked back and became an integral part of Brazil until his retirement in 2006.

Cafu announced his retirement from international football in 2006 after having amassed an incredible 142 caps and becoming one of Brazil’s most influential players ever. One of the few players to have featured in three World Cup finals, Cafu ended up winning the World Cup and Copa America on two occasions. Yet, it was the contribution from the right-back in these successes that made him an icon.

Impact in the Italian Serie A

Even though Cafu is best known for his time at international level, people tend to forget that the defender from the Jardim Irene favela of São Paulo had an exceptional club career as well. After making the move to Roma in 1997, he quickly became established as the best right back in the Italian Serie A by a huge margin.

“Trend-setting in being one of the first truly great attacking full-backs. Excellent at getting forward, but very strong defensively as well,” said Juventus icon Andrea Pirlo when naming Cafu as one of the members ofhis dream team. The Brazilian was part of the Roma team which won the league title in the 2001-01 season. Incredibly, it remains the last league success for Roma.

After six seasons at the Stadio Olimpico, Cafu made the move to AC Milan at the grand old age of 33. Many thought that the right-back was not going to spend more than a few years at the San Siro. Yet, Cafu once again proved his doubters wrong after winning the league title in his debut campaign with the club. There was more success with Milan, as Cafu was part of the team that won the UEFA Champions League in 2007. This achievement meant that Cafu joined the band of a few players to have won the Champions League, FIFA World Cup, and Copa America titles.

Criticisms towards the tail-end

The defender did face some criticism towards the latter end of his career, as his lack of impact at the 2006 World Cup was largely seen as a consequence of this waning prowess. Yet, there was no doubt that Cafu is one of the few players who did not experience a major slowdown in his career right up until his retirement in 2008. Many do still think that an early international retirement for the former São Paulo defender could have paved the way for the likes of Dani Alves to be part of the national team at a much earlier stage – even in 2006.

Even with all the small criticisms, there can be no doubt that Cafu is not just a benchmark for any right-back. Instead, he has set a benchmark for a footballer. Period. Even after several decades, the contribution from Cafu –in his prime – during the 2002 World Cup will be remembered in all its glory. This remains the last time Brazil picked up the World Cup honour. Even though this World Cup winning team featured many ‘R’ legends like Ronaldinho, Ronaldo, Rivaldo, and Roberto Carlos, few could argue that the impact made by Cafu is crucial.

Back in 2002, Cafu was writing his name in history books as the first player to participate in three consecutive World Cup finals. Cafu had managed to write his name in the winner’s medal in two of those finals. It was also the time when there is Brazilian workhorse achieved legendary status. A true icon of his generation and many more to come.