From its iconic carnival festival to its tropical beaches, the nation of Brazil has given the world many fantastic memories to cherish, with many exciting moments to look forward to. In a sporting context, the 2016 Olympics will live long in the memory, as will the unforgettable 2014 World Cup.

But perhaps the nation will be known most for its astonishing, infinite line of talented footballers that it has produced over the years. The skill and trickery of the country’s stars – past and present – are much revered and indeed much envied, with many of the game’s greatest players ever hailing from the famed South American nation. It is no surprise then that the Seleção, with their five titles, is the most successful World Cup team ever, and also the only country to have participated in every World Cup finals tournament.

The unparalleled success began in Sweden in 1958 with a 5-2 victory against the hosts. A second title was secured just four years later as the Brazilians defeated Czechoslovakia 3-1 in Chile, followed by a third title after a 4-1 thumping of Italy in Mexico in 1970. A barren spell followed, but that finally came to an end in 1994, with Italy once again the victims, this time on penalties in California. A new generation then clinched a fifth title for the country in Japan with a 2-0 victory over Germany.

A team competition, of course, but those World Cup wins would not have been possible without the star-studded list of world-class players, but who are the top Brazilian footballers of all time? We try to narrow it down to the top ten. The former Barcelona and AC Milan midfielder will be remembered for his thunderous left-footed strikes on the ground and in the air, but also for his guile and trickery with the ball at his feet. His dead-ball ability was also among the best of his generation, while his stunning displays at Camp Nou and the San Siro saw him clinch two La Liga titles and one Champions League respectively.

Despite his wiry frame and height of 6 ft 2 in, Rivaldo’s dazzling dribbles and agility also saw him often outclass opposition defenders. He retired from the national team in 2003 with an astonishing tally of 35 goals in 74 games, with five of those strikes arriving in the ultimately successful 2002 World Cup, with many classing him as one of the best Brazilian players of all-time.

A centre forward once upon a time, Sócrates made a name for himself as a technical, cunning attacking midfielder. Unlike Rivaldo, he relied on both feet for his link-up play and precise through balls, which were mainly seen during his time at Botafogo and Corinthians. Such a sharp mind on the field, and indeed off the field – where he gained a medical degree – saw him earn the nickname Doctor Sócrates.

He was a hero of the national team, despite never lifting the coveted World Cup trophy. But his displays at Spain 1982 – where he captained the side – and Mexico 1986, will live long in the memory.

The reliable right-back enjoyed a phenomenal career at the likes of Roma and AC Milan, with the Serie A and Champions League trophies among his glittering, lengthy list of awards. He also helped his country lift two World Cups, captaining the team to glory in 2002, ensuring his status as one of the all-time top Brazilian footballers.

Cafu retired from the national setup in 2006 as the country’s all-time most capped player with 142 caps. His five goals perhaps suggest that defending was his number one priority, but getting forward as much as possible was very much his main objective, with his energy and dynamism second to none during his prime years.

The powerful right-winger, like many of his compatriots, spent much of his career in South America, playing over 400 games in a 15-year spell for Botafogo. There, he truly made a name for himself as one of the top players of his generation, sliding past defenders in the blink of an eye, and in the process becoming one of the best Brazilian players of all-time.

The Hurricane’s eye for a goal was also something to behold, with his finishing ability coming to the fore in the 1970 World Cup. He clinched the Silver Boot that summer, with his seven goals second only to West Germany’s Gerd Müller, who netted ten. But it was Jairzinho who would go home from Mexico the happier, scoring in the final against Italy to help his nation lift the Jules Rimet Trophy. A truly gifted player, and one that more modern fans of the game adore for his incredible and unique style of play. The midfielder ran riot for years in La Liga during his time at Barcelona, who he helped guide to two league titles and one Champions League title. His time in yellow and green meanwhile yielded 97 appearances and 33 goals.

His honours list comprises an endless line of team and individual awards, perhaps most notably the 2002 World Cup and the 2005 Ballon d’Or. Aside from all his skill, flair and mazy dribbling, his beaming smile while on the pitch will also be remembered by dazzled fans in the years to come. A one of a kind player, the like of which the world may never see again.

The legendary striker is a hero of Brazilian side Vasco da Gama, where he played for several years at the start and towards the end of his glittering career. His clinical finishing has ensured his legacy as one of the greatest footballers of all time, with his ingenuity in the penalty area under manager Johan Cruyff at Barcelona particularly memorable.

At international level, Romário netted 55 goals in 70 appearances, with his heroic efforts culminating in the 1994 World Cup title and two Copa America titles, one either side of that famous World Cup victory. That memorable tournament saw the Golden Ball going his way, while he was also named FIFA World Player of the Year in the same year.

Incredibly, the Jules Rimet Trophy is one of the only trophies missing from Zico’s endless cabinet, with the attacking midfielder one of the greatest players not to have lifted the highly-coveted prize. But his loyal supporters won’t remember him for the failings, but for the successes, most notably during his time at Flamengo, where he enjoyed two glorious spells.

Widely considered one of the best passers ever, and even more so as one of the best free-kick specialists that the game has ever seen, the creative playmaker possessed an ability that had rarely been seen before. Zico remains fifth in the country’s all-time top scoring list, with his 48 goals coming in 71 appearances. Undeniably one of the top Brazilian footballers to ever grace the pitch.

Another great who spent much of his club career at Botafogo, Garrincha’s feints, twists, turns and bursts down the right flank gave opposition defenders nightmares, helping him earn the status of one of the best Brazilian players of all-time. The sensational dribbler is one of the most adored footballers in the country’s history.

His stunning achievements in the game cannot be pinned down to a handful of tournaments, but his displays in the 1958 and 1962 World Cups perhaps epitomise just how crucial he was in the two successful tournaments. Garrincha ended the latter with the Golden Ball and Golden Boot, while earning a spot in the All-Star Team for both competitions.

Ronaldo Luís Nazário de Lima took the world by storm when he first burst onto the scene in 1993, with the striker only getting better and better as the games went on for club and country. European giants Barcelona, Inter Milan and Real Madrid were all fortunate enough to witness the striker in his prime, with those unstoppable runs terrifying defences the world over.

The legendary forward hit 62 goals in his 98 games for the Seleção, coming to life in the 2002 World Cup in South Korea and Japan, where his eight goals fired the talented side to their fifth title. Two of those goals arrived in the final against Germany. Ronaldo will forever be considered one of the best Brazilian players of all-time, with his unique ability to find the back of the net perhaps never to be witnessed again. 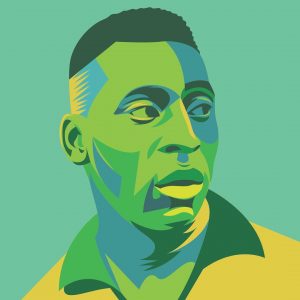 The striker’s goalscoring records may remain up for debate, but his legend in Brazil will never, ever be questioned, and will quite simply last forever. No words will ever be enough to summarise what he brought to the beautiful game, but three World Cup titles is certainly a great place to start.

Pelé is widely regarded as the best Brazilian to ever grace a football pitch, but many have even labelled him as the greatest player of all time, often rivalling fellow South American, the late, great Diego Maradona in the polls. The Brazil legend remains his country’s all-time top scorer with 77 goals in 92 games.

Given the incredible talent that the country has produced over the years, perhaps narrowing it down to ten is an impossible task. It means there are several stars missing from the list, those who deserve a special shoutout for their achievements in the game. They include the likes of more modern talents such as Roberto Carlos, Dani Alves, Kaka and Neymar, and of course the glorious heroes of old, like Gerson, Carlos Alberto, Rivellino and Falcão, although the list truly is endless.