Week 2 of the NFL season will bring us an interesting matchup of two teams that went into the year with decreased expectations (at least from the public). Both the Raiders and the Steelers, however, won their opening games and here they are facing each other in Pittsburgh this Sunday.

Pittsburgh vs Las Vegas: How is the spread betting shaping up

The line is currently slowly moving in favor of the Raiders. They opened up as a 6-point underdog (Steelers -6.0) but are now getting 5.5 points. We see a few reasons for that to happen.

The Steelers were not at all good on offense last week versus the Bills. They barely won primarily thanks to their special teams and the blocked punt that went back for a TD. They are 29th in the league with 252 total yards while their defense allowed 371 yards.

Las Vegas sits first in the league in yards per game at the whopping 491 which is a little inflated because their game went into overtime. Still, the Raiders allowed (only) 406 to Baltimore with overtime included. Another angle that we have is the fact that the Steelers have a division game against the Bengals in Week 3 which is always a ‘’look-ahead game’’. We like the Raiders at +5.5 @ -110 but if it goes lower, we would pass on the game.

Our Best Bet on the Steelers vs Raiders match

We are going with the Steelers to score under 26.5 points in the match @ -110. The Raiders offense is no joke and Big Ben looked old and slow in the season opener. Furthermore, the inexperienced offensive line showed its cracks just like we predicted last week. This also led to an inept running game. The Steelers are 28th in yards per play (ypp) at 4.6 and we don’t see how this trend changes against a pretty good Raiders defense. Steelers under 26.5 points @ -110.

PITT vs LV: Players to watch

Josh Jacobs: He is showing flashes and even though Kenyan Drake shares the backfield with him, Jacobs can bring plenty of offense to the Raiders. He managed to score 2 touchdowns on only 10 carries. Of course, his team mainly played from behind, so Derek Carr had to pass a lot.

Chase Claypool: The speedy wide receiver didn’t have a great game against Buffalo with only 3 receptions on 5 targets for 45 yards. The offense stalled a lot, so this explains the lack of production. Will he play better against an energetic defense this week? We’ll see.

Some Bonus Picks for the Pittsburgh vs Las Vegas match 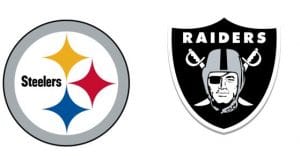 Pressing questions about the PITT vs LV game