The English national football team is one of the best in Europe and the world. The players in the team are some of the best when it comes to club football, but as a team, they have won only one FIFA World Cup in 1966. This year’s Euro 2020 is their best record in the history of the tournament as before they had only gotten to the semi-finals once in 1996.

Currently, the team is coached by Gareth Southgate, who has been at this job since 2016 and he managed the under twenty-one English national team and Middlesbrough before that. Among the current squad are players from top Premier League teams, like Liverpool, Manchester City, Chelsea, Everton, Tottenham Hotspur, and Arsenal.

The current captain of the English national team is Harry Kane and there are some popular names on the roster, like Jadon Sancho, Raheem Sterling, Harry Maguire, Jordan Henderson, Jordan Pickford, etc. What Does the Three Lions Nickname Mean?

Interestingly, England’s royal coat of arms and the team logo features lions that aren’t native to the country but are seen as a symbol of bravery and strength. The animal has been around for thousands of years and many leaders have used it in their coats of arms and battle standards over the years.

Where Does the Three Lions Badge Come from?

The “three lions” emblem originally belonged to King Richard I who reigned from 1189 to 1199. His coat of arms was last changed in 1189 to three lions that represent his three positions as Duke of Normandy, Duke of Aquitaine, and King of England.

The king’s banner was red with golden lions on it and that has been the crest of England since then. The idea of lions on a crest didn’t come from Richard I, he adopted Henry I’s idea of lions on the standards, but the difference is that Henry I had only one lion. When he married the daughter of Malcolm III of Scotland whose standard also featured a lion.

The lions on the standard became three when Henry I’s grandson Henry II of England married Eleanor of Aquitaine whose standard at the time also featured a lion. Richard, I was Henry II’s son and this adopted the “three lions” standard from his father. Richard the Lionheart’s nickname was given to him because of his reputation and most likely the battle standard with the three lions.

The “three lions” logo was adopted by the Football Association in 1863, which is also the year it was formed. The first time that England wore the official crest on their shirts was in 1872 against Scotland. Since then, the English national team has always worn this crest and they will continue to do so in World Cup 2022 Qualifying of course.

What Changes Were Made to the Badge Over the Years?

Since the first time the badge was worn in 1872, the team has proudly worn the crest, but in 1949 the crown that was originally on it was removed because the Football Association received an official “coat of arms” by Herald’s College.

After that, the ten Tudor roses were introduced and they represented one of each regional branch of the Football Association. Historically the red and white rose was used by Henry VII to join the White Rose of York and Red Rose of Lancaster as symbols of his marriage to Elizabeth of York. This marriage essentially ended the so-called “war of the roses” in 1486.

In 2003 there was another change made in the Three Lions badge – there was a star added on top of the logo in honor of the 1966 World Cup win they had against West Germany. The team hosted the tournament and that year the tournament had the most participants – seventy nations.

The first position of the badge was on the left sleeve of the players’ shirts, but a year later it was moved where it is now on the chest of each player. 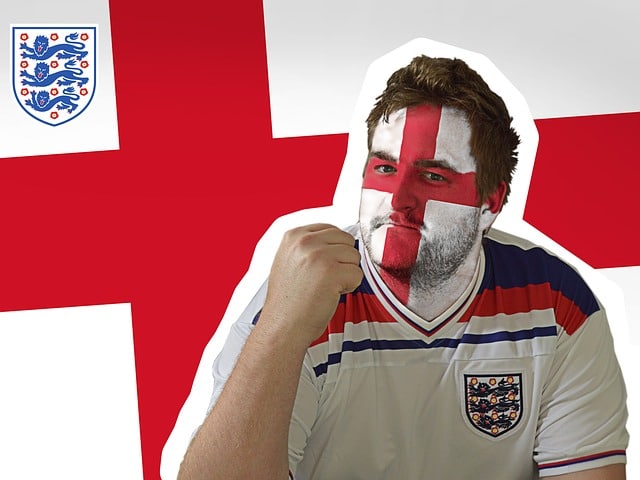 In May this year, the Football Association announced that they were replacing the three lions with a lion, a lioness, and a cub for the logo. This decision was made as a part of the grassroots initiative and has been in the works for over eighteen months. The new symbol is supposed to represent inclusivity of all levels of football in the country.

The initiative not only includes a logo change, which was created by London design agency Matta, but also features a tool, which is supposed to help parents and players find grassroots fixtures locally, access to Wembley-pitch days, and rewards programs. All of this will be available for players and their families and volunteers, fans, coaches, etc.

What are Other National Teams’ Badges & Nicknames?

The English national team isn’t the only one with a nickname and a badge with a rich history. Many other teams participating in Euro 2020 and other tournaments have various nicknames, which we will talk a little about below.

Let’s start with Italy – England’s opponent in the Euro 2020 final. Their nickname is “Gli Azzurri,” which means “the blues.” The nickname represents their national colors, which originated in the nineteenth and twentieth century and represent the House of Savoy.

The other participants in the Euro 2020 semi finals were Spain and Denmark. Spain’s nickname is “La Furia Roja,” which means “the Red Fury.” Denmark’s nickname is Red and White, which comes from the color of their shirts.

Other interesting national team nicknames include: