On the face of it, a league is not a complicated thing.

Its purpose is simple, to fairly place teams from best to worst in a nice, tidy and comforting order.

Yes, because football is a complex game there will always be arguments over the minutiae, causing the likes of Neil Warnock to grumble about a throw-in incorrectly awarded to Man City in the 5th game of the season that apparently caused them to come 18th rather than 17th. Damn referees. Damn big team bias. The injustice of it all.

But, in general, I think that over a nine-month season, most managers and fans are in steady agreement that the team at the top was probably the most deserving and the team at the bottom the least. Sorry, Liverpool. Less sorry Huddersfield.

Now, I understand that due to football’s growing popularity and television’s need to constantly generate more excitement, a table’s purpose is no longer to simply generate a winner and a loser. For more and more positions have their merits as the season draws to its inevitable conclusion, be that qualifying for the Champions League (our heroes who achieved 4th place) or the Europa League (the disgraces who came 6th).

Or, in the Championship there is the establishment of playoffs, where 3rd to 6th are put as almost equals with a mini knockout tournament to create ‘the most valuable game in football’ – A final push for more excitement, more drama, bigger highs and more crushing lows. True, it is a little artificial, but I think on the whole, most fans would no longer wish for a return of a much fairer 1st to 3rd going up to replace old 18th to 20th. Football is still a game and entertainment is still at its core.

However, there are some places where this principle has gone too far. The need to constantly create intrigue has lead to what I think can now be considered the most complicated and convoluted league format in the world. A league which effectively offers the team that comes 4th in the second tier a direct route to European football. Welcome to Belgian league.

How does it work?

We have two professional leagues – Top tier, we have the imaginatively named ‘The Belgian First Division A’ – This contains 16 teams and has one relegation.

Below that we have the 2nd Tier or the equally imaginatively named ‘The Belgian First Division B’ – This has eight teams with one promotion and one relegation.

So far, so good. Seems a straightforward enough league format with our winners and losers and a fluidity between the divisions.

But, let’s go back to the ‘Belgian First Division A’

We initially have the regular season which has 30 games (all the teams playing each other twice) and then we have a standard ranking. At this point, 16th has been relegated and their season is over. And yes at this time, we are at the end of March. In line with this, the winners of the ‘Belgian First Division B’ (I wish these league names were less clunky) has been promoted to the top tier. Their season has also reached its rather early conclusion. During this period of time, the 2nd tier has done their regular season which is a little different. As the league only contains 8 teams they sort of do it twice over. League season part one – All play each other twice, then we have winner A. Then we click that reset button with all the teams starting again at 0 points. Everybody plays each other all over again to give us a new winner – Winner B. Then a final between Winner A and Winner B to get your eventual champions and a promoted team (And yes, if Winner A is Winner B, they are allowed to be promoted without having to play a final).

Right, that is the easy bit, once that regular season is all done and dusted, we have the inevitable playoffs (running from the end of March until May).

The teams that finished in the top 6 have been dragged away to create their supergroup (my name there, the actual name is ‘Playoffs 1’) – At this juncture, their points over the regular season have been halved and order maintained. Then they all play each other again twice and a winner is decided, with 2nd also getting Champions League, and 3rd getting Europa League qualification, 5th and 6th get nothing and 4th to play the winners of the Europa League playoffs (which I will get to in a moment) for a chance to reach the illustrious 2nd qualification round of the Europa League. 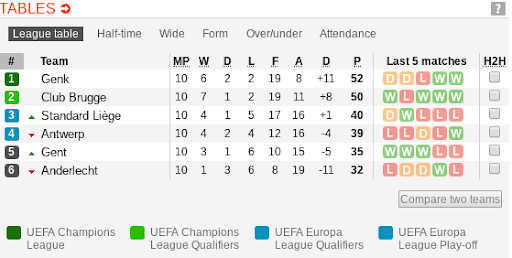 Now, in Belgium they don’t want everybody’s season finishing at the end of March, that remains a privilege of the team that finished 16th and the winners of the 2nd tier. So the rest of the teams are clumped together in what is called the ‘Europa League Playoffs’. These playoffs are split into two groups of 6. Now the mathematicians might have noticed here that there is an arithmetic incongruency here with the teams that ranked 7th to 15th only giving us 9 teams. Yes, that is right, 3 more teams from the Belgian 2nd Division B (2nd, 3rd and 4th) are given the opportunity of European football.

The groups begin at a levelling 0 points here, they all play each other twice (10 games overall), then we have winners of group A and winners of group B, to create another final. Then the winners of that matchup go and play the team that finished 4th in the supergroup (away from home) for the chance to get that sweet sweet Europa League 2nd qualification round. At this point, I imagine that was all nice and clear and there will be no scrumpled faces or thoughts about what you might fancy eating for dinner. 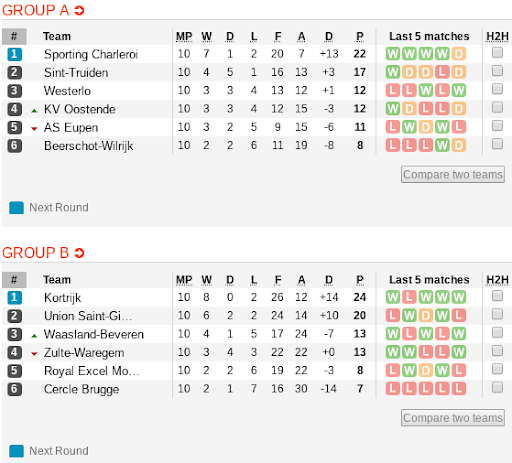 I am sorry to say that this is not the case. For getting in the Europa League is not actually achievable for every team. You need a Europa League licence and to get a licence you need to pass certain stadium rulings. To renovate stadiums to the required standards of the UEFA is just not financially feasible for the teams of the 2nd division in Belgium. In reality, the teams from the 2nd tier do not even apply for one. So even if they did go against the odds and beat all these superior teams with constant regularity and finally beat the 4th best team in Belgium away from home, they still would not get into the Europa League 2nd qualification round. And sadly, Westerlo’s dreams of beating Manchester United and being Europa League champions 2020 dissipate into thin air.

So, what really happens for these playoffs. Probably only the teams that finished 7th and 8th in the top division show any willing. The rest rotate with their season accomplishments done. Attendances drop off considerably and even the television coverage is sparse, to say the least. Yes, the reality of the whole Europa League playoffs is actually quite depressing, bearing a closer resemblance to a group of post-season friendlies.

Why do this format at all? Well admittedly, the supergroup or Playoff 1 is very exciting. With points halved, everything has been made much closer and every game is between the best teams in the league. I think you can imagine a Premier League equivalent involving just the top 6 would give a pretty great end of the season. Furthermore, it has arguably maybe even generated more varied winners – Belgium has had a different winner in each of the past three seasons.

However, overall, I think that having a league format and system that is so bent towards the best and most popular teams is not the healthiest and not always the fans choice. It is therefore not a surprise that on a recent poll, the results were almost unanimous in having this format changed and this system soundly binned for an uncluttered and more understandable one.

Despite all this, Mechelen, a team from the Belgian Second Division did qualify for the Europa League next season. Unfortunately, it was not through their rather complicated league system – they won the second division – but through the more classic entry of winning the Belgian cup. No small achievement from a second-tier team. However, even here the romance has died somewhat, as Mechelen were removed from the competition by UEFA due to their ongoing investigation for alleged match-fixing. In most circumstances, the runners up Beerschot-Wilrijk will be promoted, but then again, they are also under investigation for match-fixing. So, after all, that we are left with irony, it is the governing body’s prerogative to use this playoff system to generate greater finance and variation, however, at the end of the day, it is the individual club’s pursuit of financial reward that causes a final stagnation.