Trabzonspor might be top of the Super Lig but Sivasspor aren’t in bad form either. Who wins when they clash on Saturday? Find out with our Sivasspor vs Trabzonspor preview here along with the predictions and free tips we mention along the way.

An away win incoming

Trabzonspor have not just been the best team in Turkey this season, they’ve also had an impressive record on the road. Abdullah Avci’s men have won eight of their 10 road games this season, losing just once. Trabzonspor have won 12 of their last 14 games across all competitions and have lost just once all season. Sivasspor on the other hand, have not done too well at home this season; they’ve won just three of the 10 games they’ve played at home. It’s worth noting that Trabzonspor tend to play well against Sivasspor; they have no losses in their last four meetings with Sivasspor, and just one loss in their last seven meetings. For this reason, we’re making the prediction that Trabzonspor will win this match.

Trabzonspor will open the scoring

We’ve mentioned that Trabzonspor have won 12 of their last 14 games; we should also point out that they’ve scored first in most of those games. Abdullah Avci’s men have drawn first blood in eight of their last 10 matches. It’s been the same case when they play against Sivasspor; they’ve scored the first goal in four of the last five encounters between these sides. With this in mind, Trabzonspor will likely bag the first goal.

The best odds for Sivasspor vs Trabzonspor

Sivasspor vs Trabzonspor: Meet the teams

Sivasspor have enjoyed a good run of form over the past couple of months; they’ve won six of their last eight games across all competitions, losing just once. Riza Calimbay’s men will take on league leaders Trabzonspor today; they’ll hope they can count on Mustapha Yatabare to deliver the goals today.

Trabzonspor have been the best team in Turkey this season; they aren’t just league leaders, they have a ten point lead at the top of the table. Abdullah Avci’s men will look to put more points between them and second placed Konyaspor; all eyes will be on Andreas Cornelius.

The final word on Sivasspor vs Trabzonspor 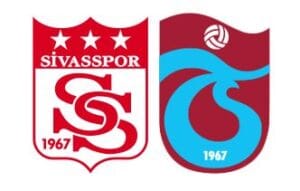