Leganes makes the trip to face the top team of the table, Almeria on coming Saturday. The guests enter the game with a defeat while the host looks for a third consecutive win coming into this game.

Free Match Tips from Punditfeed for Almeria vs Leganes

Here are some bias-free tips we have put together for Almeria vs Leganes.

Almeria would be eager to extend their two-match winning streak to hold their first position on the standings. They have got the momentum by securing five wins in the last seven matches they played. While their upcoming rivals have clearly opposite outcomes and are winless from their last five games. Though Lega has a better record in the H2Hs between the teams but based on the current form, it would be easy to predict the lead for the home side in this match.

Three of the last four H2Hs between these teams have a total of over 2.5 goals. UDA has scored three and four goals in their previous two matches while Leganes also has a ratio of one goal per game from the last five matches. So this game tends to end with a total of over 2.5 shared by both teams.

We have been witnessing both teams on the score sheet from the last four H2H meetings consecutively. Adding More, both teams have hit the back of the net in four of their last matches. So we believe the same trend to be followed in this match. But Almeria has been quite well in the defence that didn’t concede more than one goal in a game from the last eight matches. So we believe the host again to restrict the visitors with a low score and take the lead as 2-1.

Rojiblancos had the great start of the season and now have the most wins (8) after playing the 12 games of the LaLiga 2. The attacking line has been prime in the past few matchdays that displayed 13 goals in the previous six matches. Almeria has got the strength to defend their top position in the coming match.

Leganes are struggling in the relegation zone with the terrible performance in the recent matches. The visiting team has a total of only two victories in the season so far that have directed them to the twentieth place on the table. Lega has three losses and two draws in the last five matches. They lost to Tenerife in their previous game by 1-2.

Looking for the best odds for Almeria vs Leganes? We’ve got you covered. Check out our list of odds from the popular bookies and a few important stats to help you make a good prediction.

FAQ about Almeria vs Leganes 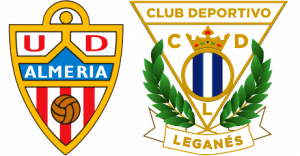