“To win is not the most important thing, Football is an art and should be showing creativity”

Football is an art, and should be showing creativity. It should be enabling expression of imagination and cunning. What that creativity is, however depends on the individual’s perspective of football.

The quote is how Sócrates perhaps summarised his footballing philosophy. Indoctrinated in the ideology of playing football for the beauty it can behold rather than the act of winning, winning trophies was a sensational, yet secondary consequence of playing football beautifully. Joy came first.

For those that do not know, February 19th 2018 would have been Socrates’ 64th birthday. A qualified physician as well as a footballer, what the midfielder prescribed as a player was playing in the most elegant of fashions.

I am far too young to have remembered watching Sócrates when at his peak, flourishing for Corinthians – many of Brazil’s jewels were effectively disallowed from leaving the homeland; Pele, Garrincha, Zito and Roberto Rivelino to name a few all played at their respective peaks in Brazil, though tempted by opportunities to move to Europe, with some doing so much later in their careers – but I do remember watching reruns of the unforgettable 1982 FIFA World Cup.

There is truly no singular ideal way as to how the game of Football should be played. Whether you affiliate with the Spanish Tiki-Taka, or the pragmatism of José Mourinho, the sense of idealism is incredibly subjective and I cannot state the following enough. But, what I cannot state enough alongside this, is just how beautiful the football of Brazil’s “underachievers” of 1982 was. Underachievers in the sense that they failed to win the World Cup when they arguably should have, but a polar opposite through having achieved Sócrates philosophy more than any other side that I can personally recollect.

Very much like Rinus Michels’ Holland side of 1974, this particular Brazil side was very individualistic in comparison with each and every opponent faced, and Sócrates was very much at the heart of it. A very attack-minded side, focusing on building-up from the defence which enabled fluency across defence, midfield and attack, Brazil flourished when given the opportunity. Four wins in four qualifying matches, scoring 11 goals in the process meant Brazil were strong favourites to win the tournament.

Sócrates was one part of an extraordinary midfield-quartet which was the heartbeat of this footballing purity – Toninho Cerezo, an excellent distributor of the ball with excellent physique and Falcao, one of the Brazilian’s who had moved to Europe prior to the tournament, to Serie A giants, Roma*, added balance and protection to the offensive and adventurous back-line, while Sócrates formed a wonderful partnership with the world-class Zico.

Tactics note: Eder’s movement from the left-wing to centre-forward positions enabled overlaps from left-back, Junior, while Sócrates would drop inside to allow overlaps from Leandro on the opposite flank. 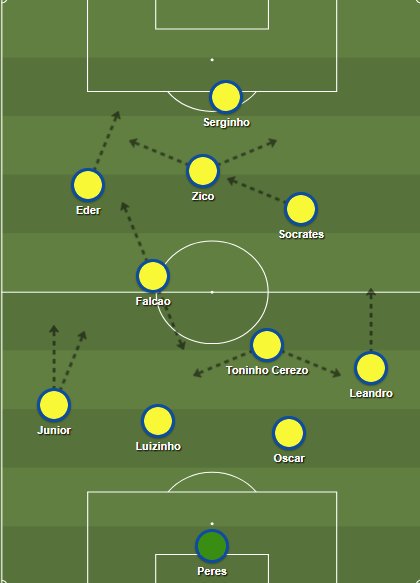 Two of the three games I recall most occurred in the group stages, and display the true meaning of what Sócrates meant by his aforementioned statement. This can be interpreted by anyone to suit their own ideals, but, these games personified Sócrates’ ideals; two fantastic wins over The Soviet Union and Scotland, 1-2 and 4-1 respectively oversaw goals of the highest order; the first, a Sócrates thunderbolt against the Soviet’s, the second, a trademark Zico free-kick against Scotland and the third, also against Scotland, a beautifully worked goal courtesy of a series of interchanges which resulted in a fine strike from Eder.

What can be said, is how this particular Brazil side maintained the synonymous Brazilian way of football, the “Ginga” or “Samba” football. This made an entertaining watch, a truly entertaining watch, but some may argue this is what truly cost Brazil in ’82; an inability to adapt to circumstance.

Brazil would eventually be knocked out of the tournament by eventual winners Italy in what was a thrilling 3-2 encounter. This arguably marked a change in how the Brazilian national side approached future World Cup’s – opting for a win at all cost approach, particularly during the 1986, ’90 and 94 tournaments.

Nevertheless, what Sócrates and his teammates at the 1982 stood for was not simply “play football one way and that is it”, they, in my opinion, stood for their footballing ideology and justified it with some genuinely brilliant performances. Regardless of what you perceive as beautiful football, it cannot be denied Sócrates and co. did just that.

Sócrates would move to Fiorentina in 1984, though staying for one season only. Zico enjoyed time in Serie A with Udinese, contesting Michel Platini for the prize of best player, but would eventually move back to his beloved Flamengo.