The English Premier League has witnessed some incredible talents throughout its glittering history.

Enigmatic managers have come and gone, several referees have played the role of the villain, while boisterous fans have made their voices felt up and down the country. But all of it would be futile without the presence of the stars that have taken the field.

The likes of Tony Adams, John Terry, Alan Shearer, Thierry Henry, and Cristiano Ronaldo – among countless others – stole much of the headlines in previous decades. Their heroics have set the bar extremely high, but a handful of players have somehow managed to match their astonishing feats in the competition.

We take a look at the players who have done that more recently, specifically in the last decade, between 2010 and 2020. Given the evolution of tactics in the last couple of years, a 4-3-3 formation seems appropriate.

Here is the Premier League Team of the Decade. 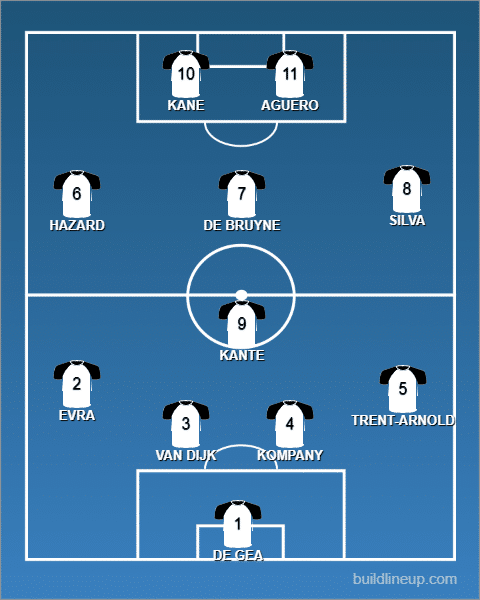 The Spaniard may not be what he used to be, but that is perhaps testament to just how good he was between the sticks in his early Manchester United days. With dramatic dives and quickfire reactions, the goalkeeper’s feet have been just as crucial as his hands in keeping strikers at bay over the years. He boasts one league title to his name, and sits 12th in the all-time clean sheets leaderboard with 120.

At 30 years old, De Gea undoubtedly still has a lot to give. But whether that comes in Manchester or elsewhere remains to be seen. Nonetheless, he is sure to be a fantastic mentor for back-up Dean Henderson, who could soon replace the Spain international in Ole Gunnar Solskjaer’s starting XI.

Unlike De Gea, Alexander-Arnold’s best days in England are perhaps yet to come. Nevertheless, his stunning start to life in senior football has surpassed even his wildest imagination. Already a Premier League winner at the age of 22, the full-back has already made over 100 appearances in the competition, picking up successive spots in the PFA Team of the Year in 2018/19 and 2019/20.

An improvement in his defensive work would do Alexander-Arnold the world of good, but Liverpool manager Jurgen Klopp has been more focused on getting the defender as far up the pitch as possible. And that decision has worked to tremendous effect, with his marauding right-back currently sitting on 29 league assists.

A rock at the back for Manchester City for several years, and a key figure in the club’s dominance in English football for quite some time. With his tough tackling and rugged dealing of opposition strikers, the former captain brought fans back to a time when English football was filled with traditional, no-nonsense defensive heroes.

Pep Guardiola certainly missed the towering defender’s presence for some time, but it looks like the club have finally recovered from the void he left when he returned to his native Belgium in 2019. Now managing former club Anderlecht, Kompany will never be forgotten in Manchester. He left England with four Premier League titles to his name, and will be remembered for one of the greatest centre-backs of his generation.

Another colossus at the back, and one that Liverpool had been crying out for before he arrived at Anfield. He received a hero’s welcome, but perhaps no-one anticipated just how impressive he would be under Klopp. Van Dijk’s impact on Merseyside can be very much likened to Kompany’s on Manchester, with both clubs more often than not proving incompetent without their star men in defence.

The formidable Netherlands man eased to the honour of the world’s best central defender before a devastating injury suffered against Everton earlier this season. With perfectly executed challenges, continuous successful aerial duels and an ability to glide across the surface, he really is a manager’s dream at the heart of the defence. While attackers are supposed to strike fear into defenders, it truly is the other way around when it comes to Van Dijk.

Only two of Evra’s five league titles may have come in the most recent decade, but such a statistic speaks volumes as to how successful his career was in England. Interceptions and perfectly-timed tackles were very much the name of the game for the former France international.

Unlike the majority of his successors, Evra prioritised his defensive duties over his attacking ones. His seven goals from 278 games epitomisethat attitude, with the small matter of 98 clean sheets simply furthering his pivotal role under the legendary Sir Alex Ferguson. Successive Serie A titles with Juventus followed, but the long-serving left-back will be remembered most for his consistent displays for the Red Devils.

Still flourishing in the competition, some may forget that the midfielder initially struggled in England during his brief spell at Chelsea. Perhaps the Blues didn’t see his potential back then, but Man City certainly did. They took a chance on the Belgian in 2015, and the rest, as they say, is history. Somehow only 29, De Bruyne still has a long and healthy career ahead of him, but he has already achieved so much for his current club.

His dazzling dribbles and ferocious strikes helped City to successive league titles between 2017 and 2019, but he will be remembered most for his scintillating passing and ability to see just about every option available to him, as well as many options that aren’t. His most recent assist saw him climb into the all-time top ten leaderboard on 76, with that 100-mark now well within his sights.

Another jewel of City’s midfield crown. While De Bruyne provided the hard-hitting, dynamic action, the Spaniard provided the much-needed soft-touch and guile to drive Guardiola to countless domestic trophies. Four of those trophies were Premier League titles, with Silva a regular in City’s starting XI during his glittering decade with the club.

Over 300 league appearances in blue produced 93 assists, leaving Silva sixth in the all-time leaderboard. Add to that his 60 goals and 214 wins and it really is an astonishing career. From cunning short passes and delicate through balls, to tricky footwork and mesmerising displays, the midfielder won’t be forgotten at the Etihad anytime soon.

He may not have been in the division for very long, but his mammoth achievements haven’t gone unnoticed. Kante joined Leicester in 2015 from the recently-promoted Ligue 1 outfit Caen, slotting straight into Claudio Ranieri’s midfield alongside Danny Drinkwater. The pair formed an immediate connection, linking up with Riyad Mahrez and Jamie Vardy to fire the Foxes to an impossible league title.

One season at the King Power was enough for Premier League giants Chelsea to swoop in. And their move paid off to great effect, with the busy French international covering every blade of grass possible to help the Blues to league glory. His unparalleled performances saw him clinch a spot in the PFA Team of the Year on both occasions, with Kante also scooping the PFA Players’ Player of the Year and Premier League Player of the Season awards in 2016/17.

Hazard was truly a joy to behold, with his quick footwork and slaloming runs striking fear into all those who attempted to get in his way. His lengthy honours list includes two titles at Stamford Bridge, while his personal contribution involves 85 goals and 54 assists across 245 matches.

The Belgian certainly hasn’t hit the ground running since making the switch to Real Madrid, with his boundless talents failing to come to the fore so far in Spain. His best years may be behind him, but luckily for Chelsea fans and indeed Premier League followers, the attacker managed to provide several years of dazzling displays during his time in England.

Another to have somewhat faded away in recent times, but one who is capable of astonishing feats on his day. A string of unfortunate injuries has forced the Argentine to spend a lot of time on the sidelines, but his lethal abilities in front of goal will ensure he goes down in Premier League folklore.

Arriving in England in the summer of 2011, this decade truly belongs to him. The forward boasts an average of 20 goals per season across his nine full seasons in the English top-flight, despite many of those campaigns also involving injury troubles. The goals place him fourth in the all-time leaderboard on 180, with those strikes coming in just 268 appearances.

The Tottenham striker has proven his doubters time and again in recent history, and he is showing no signs of slowing down. The north London outfit certainly wouldn’t be where they are without their star man. Kane’s stunning shooting ability and link-up play with those around him is perhaps second to none, and he is now enjoying another stunning season in the top level of English football.

The England international is certainly following in the footsteps of Aguero, and occupies ninth spot in the league’s all-time top goalscorers. He has climbed those ranks effortlessly in the latter stages of the last decade, with his 155 goals coming from 229 matches. Spurs legend Jermain Defoe has just seven more, and that is a feat that Kane will undoubtedly overcome in the very near future.