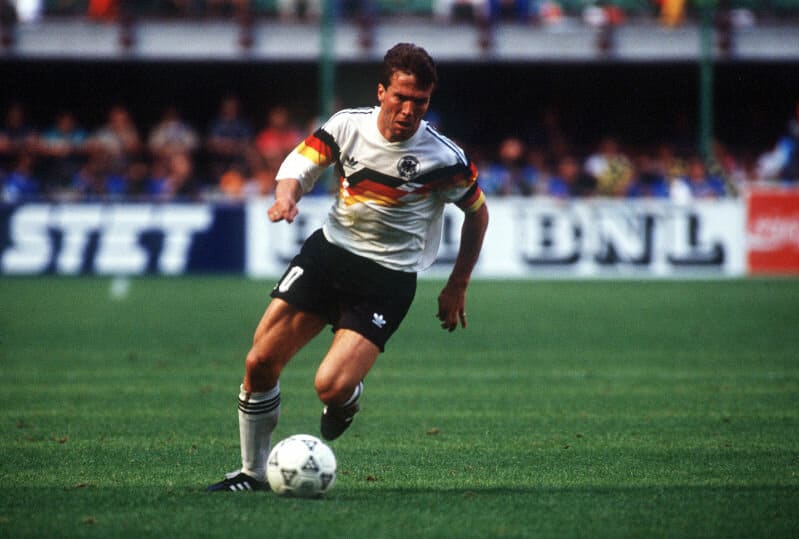 Among the large contingent of German players, Lothar Matthaus is regarded as one of the greatest of his kind. He remains as one of the few players to have won the domestic league titles in two countries apart from the FIFA World Cup and UEFA European Championship. In fact, one of the few trophies that managed to escape Matthaus’ clutches was the European Cup. Such was the extraordinary success that the midfielder achieved in his career that he remains the only German national to have won the FIFA World Player of the Year even now.

Where does Matthaus figure in the football great list?

Matthaus might not be the first name when trying to put together a list of the top five football players of all time. Diego Maradona and Pele might just steal the top spots, while it is even possible for the likes of Lionel Messi and Cristiano Ronaldo to finish ahead of Matthaus. Yet, few will argue that Matthaus would be the undisputed king if not for his position in the middle of the pitch. As someone who does not score a lot of goals, it can be quite a difficult task to feature on the headlines. Yet, Matthaus was a consistent name on the team sheet owing to his incredible consistency, powerful shots, great vision, and excellent tackling. Many, including Maradona, regard Matthaus as a complete player and his versatility only allowed him to survive through the different eras with aplomb.

Borussia Monchengladbach provided the opportunity for Matthaus to make his debut in 1979, which was an era that featured the likes of Johan Cruyff and George Best. Yet, Matthaus was playing alongside the likes of Zinedine Zidane and Thierry Henry by the time he retired in 2000. Such longevity at the top level of the game is quite rare, as Matthaus was not a spent force by the time he announced his retirement from the game.

Incredibly, this story of longevity and success did not immediately get going. During his five seasons with Monchengladbach, Matthaus did not pick up major honours. Yet, his impact in the Bundesliga came to the prominence of Bayern Munich, who put the young midfielder on the path to incredible success. Immediately after the move to Bayern Munich at the start of the 1984-85 campaign, Matthaus found himself amidst a mountain of trophies starting with the Bundesliga title. He would go on to pick up three consecutive league titles after joining Bayern.

The days with Monchengladbach were largely spent honing the skills to become a complete midfielder and these were crucial to Matthaus exerting a huge influence on Bayern from the 1985 season onwards. Almost every major trophy was picked up with the German giants with the only exception of the European Cup. Ultimately, Matthaus would go on to retire without having won this prestigious honour in club football.

The lack of a Champions League/European Cup would not turn out to be a major disappointment, as Matthaus was starting to become a huge influence at international level. After representing West Germany in his youth days, Matthaus made his debut for Germany in 1980 and went on to pick up the European Championship honour with this sole appearance.

Matthaus would have to wait for a decade to win the trophy regarded as the ultimate achievement for any footballer – FIFA World Cup. An indispensable member of the German team, Matthaus’ record peaked in 1990, as he scored seven goals in 15 matches that year. This remains as the highest goal return for the midfielder in a single calendar year with Germany.

Just like many of the top players who moved to the Italian Serie A during the 1980s, Matthaus also found himself playing with Inter Milan for a period of four years from 1988 to 1992. A regular goalscorer for the Nerazzurri, Matthaus found joy when it comes to lifting trophies even at the San Siro, as he picked up the Italian Serie A, UEFA Cup, and Supercoppa Italiana. Even though Inter were struggling up until the signing of the German, this move appeared to galvanise everyone at the club, where the likes of Klinsmann was also able to achieve success.

Towards the end of his days at Inter, successes slowly started to elude the German, who ended up switching back to German football with Bayern Munich. This kickstarted another spell of trophies with a couple of Bundesliga titles. Still, the European Cup would continue to elude the player who had already achieved legendary status by then.

Later days of the legend

Towards the end of his playing days, Matthaus made the switch to Major League Soccer, where he once again picked up trophies with MetroStars. After just one season in North America, Matthaus hung up his boots. Incredibly, the legend came out of retirement in 2018 – at the grand old age of 57 – to play one match for FC Herzogenaurach – the club he represented as a youth.

Matthaus might not have scored the goals of Maradona or have bamboozled defenders like Messi, but he has lived up true to the German heritage of being efficient and making the most of every minute. His managerial career may not have produced a lot of success, but his Ballon d’Or award in 1990 helps him stand tall amidst a crowd of top German players.