November 25th was a day of mourning, as football lost not only one of its most finest players, but also a figure who transcended the game and gave his people, of Argentina and of Naples, hope, success, and joy. Diego Maradona captivated the imaginations of fans across the globe with his talent. Experiencing a career of fantastic highs and damning lows, Maradona’s firmest hour came in the summer of 1986, as he guided Argentina to its second World Cup.

In winning the World Cup, Argentina established themselves as a side capable of being compact, whilst also playing flexible football when attacking, and Maradona was at the forefront of that. Here is an analysis of Maradona at the 1986 World Cup.

Argentina’s system and Maradona’s freedom within it

Coach Carlos Bilardo set up his Argentina side in either a 4-D-2 or a 3-5-2. Argentina kicked off in their first game against South Korea with a midfield diamond and two centre-forwards. Maradona started at the tip of the diamond in behind the forwards. But Maradona had the licence to drift either out wide, or into deeper positions to receive the ball and orchestrate attacks. 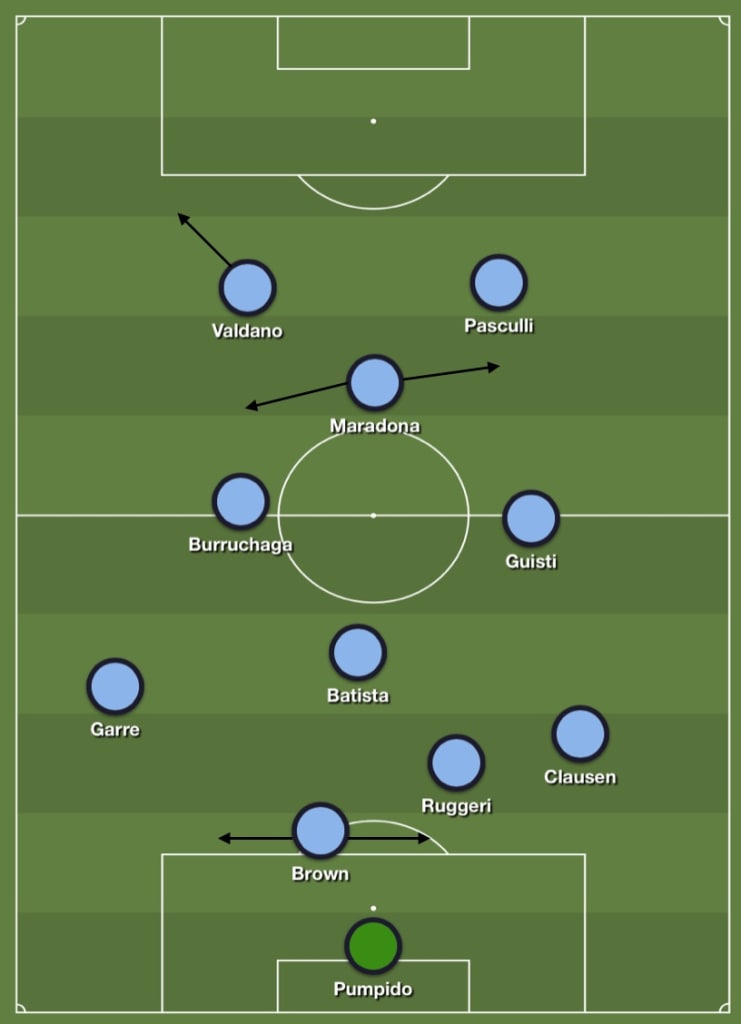 When drifting to the wings, or into the half spaces, Maradona seemingly aimed to avoid tight man-marking, or at least drag the marker out of position, and was also in a good place to swing balls into the box as they could be played diagonally.

South Korea were beaten comfortably, but Argentina switched to a 3-5-2 against Italy in the second group game. This was presumably because Italy were a better outfit than Korea, and taking out a centre-forward and replacing them with another midfielder meant Maradona played as a nominal deep-lying forward and had more room to dictate in advanced areas. Maradona even scored his first goal of the tournament, peeling off one Italian defender whilst making a run into the box and finishing low and hard into the corner.

The 3-5-2, used because of a decline in use of wingers and full-backs becoming more attack-minded, was a consistent feature as Argentina reached the competition’s latter stages. The wing-backs had different roles; the right-sided Ricardo Giusti was a midfielder shifted out wide, and tended to move infield more in possession. The left-sided Julio Olarticoechea was a full-back pushed forward, and was attack-minded in comparison to the more defensive-minded Oscar Garre. 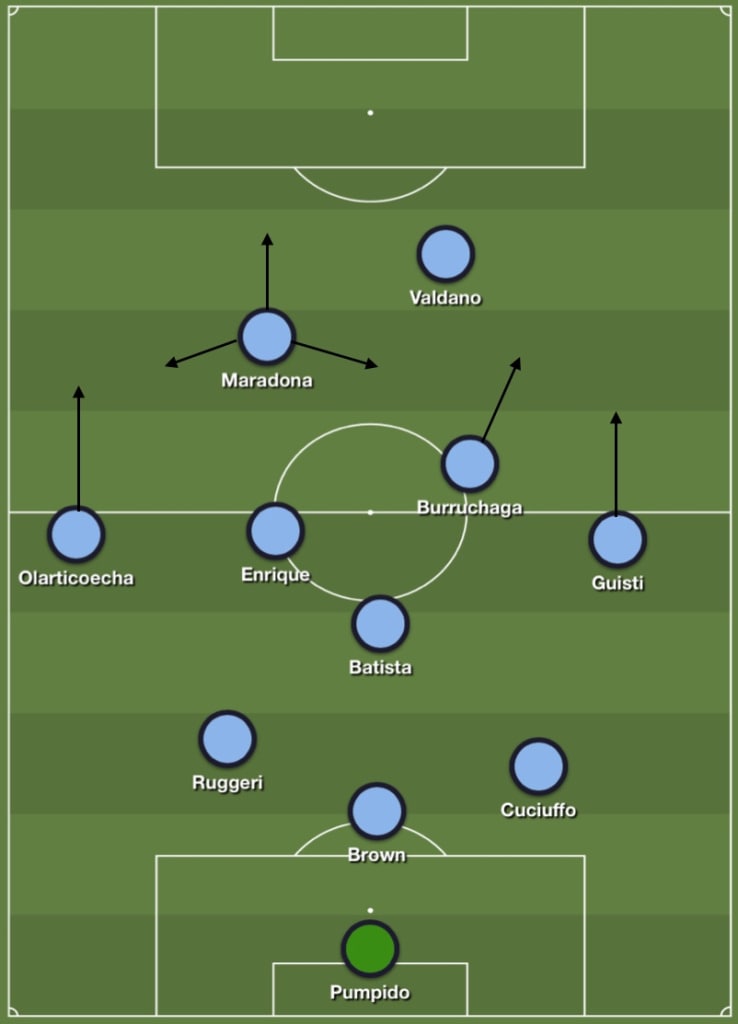 Argentina’s set-up was compact, and the defence had to know when to cover space, but the system was tailored to bringing the best out of Maradona, who propelled a group of already good players to a higher level. The system, especially the 3-5-2, combined compactness and pressing without the ball, and three attackers; Maradona, Jorge Burrachaga and Jorge Valdano combining and exercising flexibility – When Maradona would drop and receive the ball in deeper positions, Burruchaga would make runs forward from midfield.

Valdano was excellent in pulling defenders out of space when making runs via the channels. And when Valdano was in a deeper position, either Maradona or Burruchaga would make a run ahead. There was also room for the three to combine on the edge of/in the box. For Argentina’s third goal (and Maradona’s third assist) against South Korea, for example, Maradona capitalised on a long pass being knocked down, darting past two players on the edge of the box before his low cross inside the box was converted by Valdano.

The three attackers would rotate positions to avoid marking, and poor marking could also be taken advantage of in combinations. Maradona gave Argentina the lead in the semi-final, making a run, unmarked, between two Belgian defenders and, with the outside of his left foot, poking the ball over the goalkeeper and goal bound.

In isolation, Maradona had excellent vision, but the range passes he played were expanded by his positional freedom and the movement of other midfielders and forwards. Maradona was able to drop into deeper areas within the half spaces, even closer to the defence, so as well as dribbling to break down defensive shapes, Maradona could play passes from deep, either lofted passes over the top of/in behind the opposing back line or to switch the ball wide.

Maradona could be relaxed in possession, detecting the right pass. The no.10 could control the tempo of the game, slowing it down by holding onto the ball. Doing this gave teammates time to get into advanced positions so Maradona would be able to find them with a pass.

Through balls into space where teammates were making runs were also frequent. Burruchaga’s movement was a key beneficiary of Maradona’s repertoire, as shown in the final against West Germany. Maradona had a testing first-half (you will read why a couple of sections down), but was able to combine with the midfielder on two key occasions. The first overseeing Maradona evade marking and feed Burruchaga through quickly and forcing a save.

The second, a phenomenal volleyed pass from the right-side winning Argentina the World Cup. Both took advantage of Germany defenders leaving large amounts of space between themselves and their goal, with Burruchaga timing his run well and being in the clear, one-on-one with the goalkeeper both times.

Maradona being set free from the shackles of static positioning meant when he did venture across the pitch, he could attract pressure and therefore create gaps elsewhere on the pitch, which could be exploited by a pass/run combination, or Maradona’s dribbling, aiming to break down the oppositions defensive shape.

A combination of deft touches, close control, low centre of gravity and change of speed made Maradona almost unstoppable in full flight when running with the ball.

Maradona’s dribbling created goal scoring chances, even without the help of teammates. The most memorable moments within Maradona’s finest hour came within literal minutes of each other. After a goal that sparked controversy still discussed today, Maradona pirouetted on the edge of the halfway line. Glenn Hoddle, Peter Reid and Terry Butcher were outwitted, their challenges averted. Maradona raced into the box, dragging the ball past goalkeeper Peter Shilton and scoring the most magnificent of goals.

The goal was an exhibition of close control balance and Maradona’s relentless will to dribble at the opposition. Noting the bobbly nature of the pitch at The Azteca Stadium, it was highly impressive for Maradona to retain the ball in such fashion. According to Whoscored, Argentina attempted a total of 30 dribbles against England. 19 of those were from Maradona alone. 12 of those were completed dribbles.

Dribbling could force Maradona into the box. His second goal against Belgium was another spellbinding goal, where Maradona took on multiple players, in this case four, and forcing the defence back as he drifted inside the box, shooting into the far left corner to double the lead.

To add further perspective, a piece from Statsperform suggested Maradona had 2.1 xG, adding to the notion that Maradona’s dribbles were uncommon and drew out hard goal scoring opportunities. He was a mazy dribbling genius.

How the opposition tried to stop Maradona

In an interview with World Soccer Magazine, Maradona described the 1982 World Cup as “A World Cup of bruises.” Four years later did not see much change, with Maradona being fouled 53 times, the most in a single World Cup tournament.

Maradona looked to find space against marking through his dribbling, but only a minute had passed against South Korea and Maradona had been hacked. These fouls sometimes led to free-kicks in dangerous areas, and two in the opening game led to goals. The second was a lofted delivery into the box. Centre-back Oscar Ruggeri peeled off his marker in the box and headed the ball into the bottom corner to double the Argentine’s lead.

England opted not to man-mark Maradona, amidst fears that if they did, there was a strong possibility the defensive shape would be dismantled. Instead, the nearest player to Maradona would press and try to force Maradona into less dangerous positions. England had a very conservative set-up against Argentina, playing long balls into their forwards, but the forwards lacked mobility and support in attack from the midfield. It was not until late on when left-winger John Barnes was introduced that England began to properly threaten. It was ironic, given Bilardo’s previous comments on wingers and Argentina’s system itself, that Barnes would dribble down the left flank and send in a cross for Gary Lineker to score a consolation goal.

And whereas during the semi-final, Belgium tried to swarm the centre of the pitch, pressing Maradona as soon as he received the ball, West Germany in the final were one of the sides to opt for a man-marking approach. Midfielder Lothar Matthaus was tasked with marking Maradona, and for a large chunk of the game, it did pay off. Matthaus would follow Maradona when he drifted wide to receive the ball from switches and when Maradona reached the box, Matthaus would stick tight to the playmaker.

Maradona was stifled creatively during the first-half. But, because Maradona tended not to drop too deep in the final, instead staying closer to the Germany goal, Matthaus was distant from the Germany attack, so it lacked support going forward and Germany struggled to create too much, outside of the two goals, one of which was from a corner.

During the second-half, Maradona did have more chances to pick out passes, including one that set-up the winning goal.

Freedom meant Maradona could express himself within a system that was otherwise rigid. Maradona was not only a game changer, but also a genuine reason to watch football.