We’ve come to the end of the F1 2022 season, and what a season it has been! The final race will be taking place this weekend in Abu Dhabi on the Yas Marina circuit – the most expensive venue to host an F1 race. Read on to learn about our F1 Abu Dhabi prediction… We can expect to see some exciting and intense action on the $1.32 billion Yas Marina Circuit, the most grandiose venue to host Formula 1. It will be the 14th time the race is hosted in Abu Dhabi.

Here are some key things to be aware of before you watch the race: Sergio Perez and Charles Leclerc are fighting for 2nd place in the Drivers’ Championship. Ferrari and Mercedes are fighting for second in the Constructors’ Championship. Perez and Max Verstappen will be battling it out against each other after the World Champion’s refusal to allow Perez to pass in the Brazil GP. This will be Sebastian Vettel’s last race, as he will sadly be retiring.

With so much on the line, and with so many different motivations on the track, we can expect to see a highly emotion-driven performance from the drivers this weekend.

The Red Bull power pair came out on top. It didn’t come as a shock that Max Verstappen took pole position for this weekend’s Abu Dhabi Grand Prix! He will be followed by his Red Bull teammate, Sergio Perez. In third place on the grid will be Ferrari’s Charles Leclerc.

Perez set the early pace, but Verstappen took over in P1 by 0.066s on 1m24.754s. Carlos Sainz came in third place, three tenths off the Redbull team’s pace, but a tenth clear of his Ferrari teammate, Leclerc.

Verstappen will be starting the Abu Dhabi Grand Prix race in pole position, so we expect him to take advantage of this headstart and finish what has been an incredible racing season for him, with yet another win.

As incredible as Verstappen’s performance has been, his biggest rival is worth taking note of. Charles Leclerc had a great start to the 2022 season, and many thought he could take Verstappen’s championship away. Even though he was unable to, he showed that he was Verstappen’s biggest rival, surprisingly instead of Hamilton.

In Abu Dhabi, Leclerc will be racing and fighting for maximum points to finish in 2nd place. But Perez will not be making it easy for him.

Perez is head-on with Leclerc right now – both drivers have 290 points. The final Abu Dhabi Grand Prix will decide who finishes in 2nd place, so we can expect to see some intense racing and battling on the track this weekend! It could really go either way, so we can look forward to some toe-to-toe action! Having said that, Perez will be starting the race in second position, which could turn out to be the deciding factor for who will end up in second place…

Not only will Perez and Leclerc be battling it out for second place, so will Ferrari and Mercedes in the Constructors’ Championship!

After Mercedes’ fantastic performance last week in Brazil, with both Russell and Hamilton coming in first and second place, there’s a real shot for Mercedes to overtake what seemed to be a dominant Ferrari team. Mercedes have been used to coming in top place for years. There’s no doubt that Russell and Hamilton will do everything they can to make Mercedes proud, as we end what has been a somewhat disappointing season for Mercedes.

Having said so, Ferrari’s incredible performance during the qualifying races, with Leclerc and Sainz starting the race in 3rd and 4th positions, has us thinking that the second spot in the Constructors’ Championship will be tilting in Ferrari’s favour.

What are the current standings?

Even though Ferrari have been the favourites to take second place, after Mercedes’ performance in the Brazil GP, we can expect anything to happen this weekend! 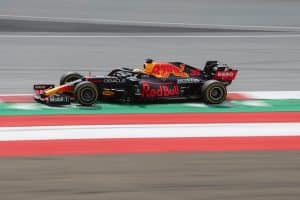