Scoring a hat trick is an achievement in itself, netting the perfect hat-trick, one with your left foot, one with the right and the other with your head is something special but nothing compares to scoring all three of your hat-trick goals in a very short space of time.

Here are the top 10 fastest Premier League hat-tricks of all time:

The 2014/15 season was Sadio Mane’s first in English Football. He performed fairly well, with 10 goals and four assists. Three of those goals would come in the blink of an eye, as Southampton smashed Aston Villa 6-1 in their final home game of a special season, where they finished a surprising seventh place.

Graziano Pelle’s header set up Mane as he ran past two Villa defenders before firing straight at the sliding Shay Given. The rebound fell kindly back to Mane as he tapped into an empty net in the 13th minute.

Shortly afterward, Alan Hutton would play a sloppy back pass to Given, and the tireless Shane Long caught up with the wayward ball. The resulting scuffle between fellow Irishmen Long and Given left the loose ball up for grabs, and it was Mane who had the quickest reaction to pick it up and fire home into the empty net to double Southampton’s lead.

Long again would prove instrumental to Mane’s third, as a Southampton counter-attack had him making a fleet-footed run down the left wing before crossing it towards an unmarked Mane. Mane wasted no time, placing it accurately into the top right corner past the desperate reach of Given.

The entire sequence was clocked at an astonishing two minutes 56 seconds, the fastest ever hat-trick in the Premier League.

We go to the oldest hat-trick in this list, on 28 August 28 1994, when Robbie Fowler scored three goals in the space of four minutes 33 seconds against Arsenal. Fowler scored his first just before the 26-minute mark, as Martin Keown’s and Ian Rush’s aerial duel resulted in the ball falling kindly to him. Fowler made no mistake as he fired a left-foot finish past David Seaman.

The second came less than three minutes later, as Steve McManaman made a 60-yard run from his own half before releasing Fowler. Fowler then proceeded to place his shot perfectly towards the far post beyond the reach of Seaman.

And just 109 seconds later, Fowler would complete his hat-trick after John Barnes chipped the ball beautifully over the Arsenal backline as Fowler showed his advantage in pace. Seaman did well to save his initial shot but Fowler was alert to the loose ball and quickly tucked it into the open net from a tough angle to complete a record-breaking hat-trick.

The 19-year-old would hold the record for the fastest Premier League hat-trick for almost 21 years, with no one even coming close to breaking it throughout that spell.

A remarkable 9-1 victory over Wigan Athletic in 2009 saw Jermain Defoe hit five past Stephen Kirkland, three of which came within the space of just seven minutes. The first was in the 51st minute, as Defoe expertly met a fine deep cross from Aaron Lennon – who himself had an immaculate game – to finish it in the top corner from close range.

Defoe added to his tally after Wilson Palacios’ speculative long pass evaded two Wigan defenders and allowed the ball to reach him through on goal. From a less-than-ideal angle, Defoe showed great composure to finish past Kirkland for the second time.

He would cap off his hat-trick after some fine work by Lennon down the line before crossing from the right. Defoe was alert and ran towards the near post before volleying past Kirkland again to complete the hat-trick in just seven minutes, the second-fastest in Premier League history at the time.

Gabriel Agbonlahor, widely considered one of Aston Villa’s greatest ever players, had a day to remember on the 17th of August 2008 against Manchester City.

Agbonlahor fired in his first in the 69th minute after John Carew’s fine header back across goal from a corner, before a quickfire double soon after sealed the hat-trick.

The City defence was left missing when Agbonlahor doubled Villa’s lead in the 74th minute, as he was left unmarked as he met Gareth Barry’s cross. Two minutes later, a quick counter-attack again saw the brilliant Barry thread a perfect through ball to Agbonlahor to set him up one on one against goalkeeper Joe Hart. The striker finished for the third time in the space of eight minutes. The game ended 4-2 to Villa, a strong victory early on in the season.

Andy Carroll produced his magical feat in just over seven minutes, coming to West Ham’s aid when they were 2-0 down at home to Arsenal. In the 44th minute, Aaron Cresswell delivered a peach of a cross into the box, which Carroll met after a magnificent leap over the Arsenal defence.

Carroll would double the lead minutes later in stoppage time, as Mark Noble lofted a ball into the six-yard box. Carroll found himself with far too much space as he received the ball, and he finished it with a scissor kick past David Ospina.

Carroll would complete his hat-trick soon after halftime in the 52nd minute. Michail Antonio held off Nacho Monreal on the right before delivering a cross towards the far post. Carroll easily leapt above Hector Bellerin to head the ball past Ospina for the third time. Arsenal would later equalise, with Carroll’s heroics only enough for a point in the end.

Sergio Aguero will go down as one of the best strikers to grace the Premier League. His scintillating five-goal display against Newcastle in 2015 will undoubtedly be a highlight.

Trailing 1-0 initially, Aguero levelled the score in the 42nd minute after David Silva’s inch-perfect ball over the top found Fernandinho. He headed it back across goal towards a free Aguero in the six-yard box, who instinctively headed home.

Seven minutes later in the second half, Silva took advantage of a poor turnover of possession by Newcastle in their own half and quickly got the ball to Aguero just outside the box. Aguero again showed great confidence in taking the shot himself instead of looking up. The shot was deflected by a Newcastle defender to send it past the wrong-footed Tim Krul.

Shortly after, a classic De Bruyne through ball found Aguero at the end of a perfectly timed run, and he showed trademark composure to chip it over the diving Krul into the net. Two more goals that day would seal a special five-goal show by Aguero as City won 6-1 at home. 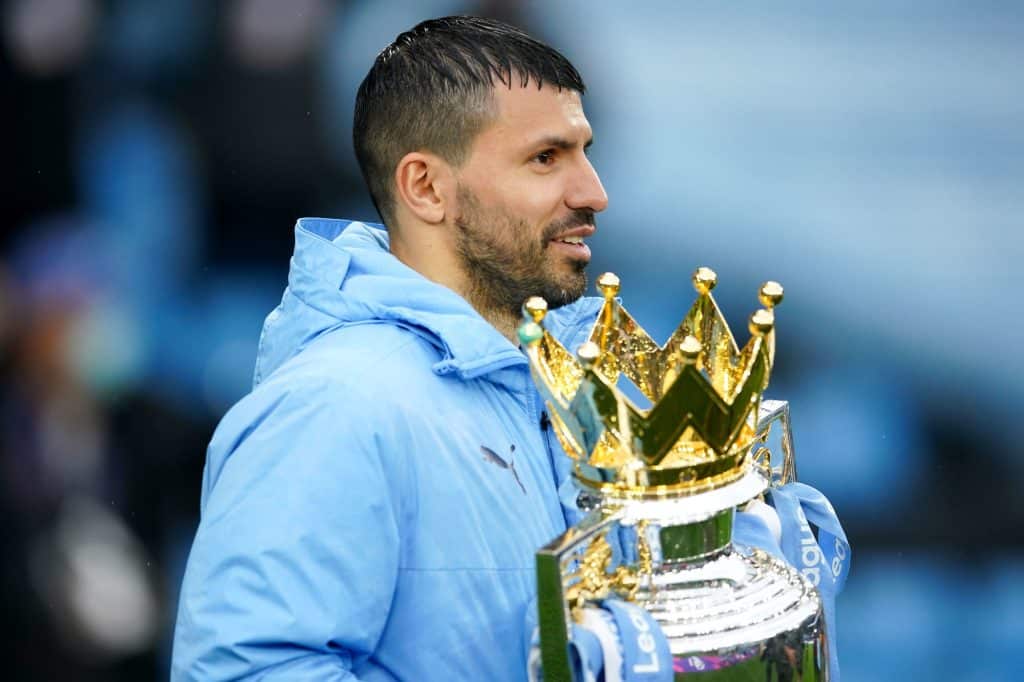 Ian Wright had a stellar Premier League career, and is one of two Arsenal players to feature on this list. A cross from the left by Glenn Helder was cleared unconvincingly as it fell to Wright who made no mistake as he half-volleyed the ball past goalkeeper Clive Baker for his first.

More poor defending by Ipswich followed three minutes later, as Wright was allowed to get in front of his marker from a low corner delivery, and he produced a fine diving header towards the goal for his second.

Wright would get his third after a disastrous back pass by Ipswich striker Ian Marshall was pounced on, and despite dogged resistance by Baker, the ball inevitably found its way home.

A player’s full debut is always a special occasion, but rarely as special as Jermaine Pennant’s in 2003. Southampton found themselves on the receiving end, as Pennant announced himself to the Premier League in style. In remarkable fashion, fellow Gunners midfielder Robert Pires also netted a hat-trick in the game.

2 – Arsenal beat Southampton 6-1, with Robert Pires and Jermaine Pennant both scoring hat-tricks. It was the first time two players had scored a hat-trick in the same Premier League match. Hatful. #OptaPLSeasons pic.twitter.com/2gO64VmpTh

In the 16th minute, Giovanni Van Bronckhorst set up Pennant on the right, and he calmly finished past Paul Jones. Three minutes later, Pennant again was presented with a goalscoring opportunity, as Thierry Henry’s deflected shot was parried straight towards Pennant, who made no mistake converting the tap-in for his second.

Pennant capped off his hat-trick in the 26th minute, after some brilliant work by Henry, who showed great composure to retain the ball under pressure before releasing Pennant perfectly on the right, and from an almost identical position to his first, he once again produced the goods to seal an astonishing debut hat-trick.

In October 2000, Manchester United legend Teddy Sheringham gave a scintillating display in a 5-0 rout of Southampton. His first goal came about in first-half stoppage time as Paul Scholes dragged two defenders with him before finding Sheringham, who was left in acres of space when the ball found him on the left. Sheringham showed great composure to produce a lovely chip over goalkeeper Dave Jones.

Next, in the 51st minute, Sheringham got on the end of a David Beckham cutback from the right and made no mistake as he took the shot first time, rifling the ball to the top left corner of the net and giving Jones no chance.

A fine team move capped off Sheringham’s hat-trick, as a strong driving run by Nicky Butt resulted in a pass to Yorke, who brilliantly teed up the ball onto the path of the onrushing Sheringham. Sheringham again showed great composure to send the keeper the wrong way and slot the ball into the bottom right corner, completing his 10-minute hat-trick.

Solskjaer, the so-called “Baby Faced Assassin”, was known for his ability to impact a game from the bench. And against Nottingham Forest in 1999, his uncanny ability was on full display. With the score 4-1 to Manchester United, he was subbed on in the 72nd minute for Dwight Yorke, who himself had scored a brace.

In the 80th minute, Beckham passed the ball to the overlapping Gary Neville, who in turn produced a fine low cross from the right that evaded everybody in the six-yard box until it reached Solskjaer at the far post. The substitute made no mistake tapping in for his first of the game.

Eight minutes later, Solskjaer again found himself on the scoresheet. A great offside-beating run to meet a wonderful long ball from Beckham put himself one-on-one with Forest goalkeeper Dave Beasant. His initial shot was finely saved, but the loose ball fell kindly back to Solskjaer, who proceeded to go past the keeper before producing a fine finish into the top corner of the open net from just inside the box.

He would complete his hat-trick in the 90th minute after Scholes found him with space on the left. Solskjaer brilliantly settled himself with a fine first touch with his left foot before striking a ferocious volley with his right to complete a 10-minute hat-trick. He would score one more goal in stoppage time as United ran out 8-1 winners. It was the biggest Premier League away victory at the time, thanks to a ruthless display from the young Norwegian. Most hat-tricks by nationality: English players have scored 160 Premier League hat-tricks, more than any other nation

Most hat-tricks in a single campaign: Alan Shearer scored five Premier League hat-tricks for Blackburn Rovers in the 1995/96 season

The perfect hat-trick: 35 players have scored a perfect Premier League hat-trick, with Robbie Fowler doing it three times and Yakubu doing it twice