Many would agree that being a shortstop in baseball is one of the most difficult positions of them all. Not only do you have to be a defensive wizard, but you also have to have your wits about you to cover second and third base if necessary. Of course, not all MLB players are able to perform these duties to a satisfactory level, which is why our list of the best MLB shortstops is a little more specialized than other categories. On that note, let us get right into things as you are no doubt eager to see who these guys are!

The best MLB shortstops of 2021

To come up with this list of the best shortstops in the MLB, we’ve checked out the playing highlights, statistics, and overall potential of all shortstops in the league. This was no easy task, especially with the wealth of statistics to analyze, but we do believe we’ve managed to discover the true best of the bunch:

While we’ve listed some very talented guys on this list, arguably, Fernando Tatis Jr. is the best there is. For us, he is one of the most versatile shortstops in the game, being able to slog home runs seemingly at will and put in incredible defensive performances too. If you were in any doubt as to this guy’s abilities, let us hit you with some figures. First of all, since joining the Padres he has managed to nail 39 home runs, his hard-hit rate percentage is in the 100th percentile, and he has racked up 27 stolen bases. And that’s just for his attacking metrics.

For his defensive game, as he has grown and evolved as a player, in the 2020 season he finished with seven outs above the average figure in the MLB – now that’s talent!

Lindor is five years older than the first superstar on our list – Tatis Jr. At 27 years of age, he is widely regarded as one of the best MLB shortstops of our time, although Tatis Jr. could easily surpass this status if he remains on his current path. However, for now, he is definitely in the mix as one of the most prolific shortstops there is. If you need any clarification on this matter, we needn’t say more than the fact that Lindor is a two-time Golden Glover and a four-time All-Star player.

These kinds of accolades don’t happen by accident, and to make a comparison between his skills and others in his position, his overall WAR score has reached 28.7. Again, these impressive figures have come through dedication, hard work, and incredible shortstop performances over the course of his many seasons at the Mets. 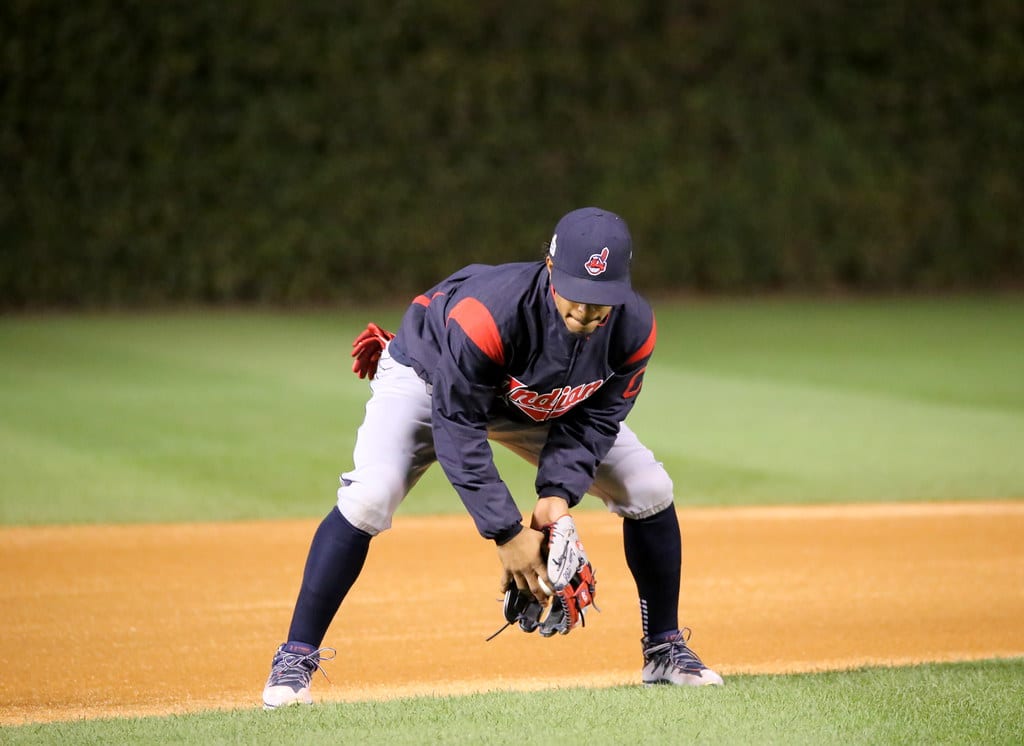 To state the obvious, the Colorado Rockies are definitely not one of the best teams in baseball anymore. Back in the day, sure, they could pose a threat to some of the bigger teams, but nowadays, not so much. With that said, they still possess one of the best MLB shortstops in the game in the form of Trevor Story. The 28-year-old legend has the third-best overall WAR score for this position in the league, boasting a rating of 14.2. And throughout the last three seasons at the Rockies, he has smoked 83 home runs combined with 65 steals. How about those for offensive figures?

Of course, being a great attacking player isn’t all that’s required from shortstops. So, how does Story fair in the defensive category? Well, pretty well is the answer to that question. Not only is Story absolutely rapid on the field, but he also has great hands to snap up quick catches and steal balls off the ground, and his decision-making is top-notch too.

We had to include Bogaerts on this for several key reasons. Sure, there aren’t many MLB fans that would rank him in the same league as guys like Tatis Jr. or Lindor, but he’s a consistent shortstop – there’s no denying that. At 28 years old, he has worked on his game for an amazing 8 years with the Boston Red Sox, so his skills really have been nurtured from a young age. And over the last three seasons, it would seem that his efforts are starting to pay dividends. Not only is he the only shortstop with a 130 OPS+ rating, but he was also averaging 94.9mph for both line drives and fly balls.

With that said, while Bogaerts’ attacking game might be more than decent, his defensive skills aren’t always at the top of the three. This is the main reason that we cannot really classify him as one of the top two or three shortstops, even if he is definitely within the top five. But unfortunately, his hand skills, throwing accuracy, and decision-making can vary quite a lot from game to game.

Last but not least, we have Trea Turner of the Washington Nationals. Out of all of the guys on this list, Turner is one of the most exciting to watch, even if he is a little unpredictable at times. Concerning his attacking play, he is definitely one of the best MLB shortstops in the business. He actually boasts the highest OPS+ rating of any other player in his position, and regarding his abilities to cause problems for the opposition – it’s all due to his speed. Believe it or not, Turner has regularly been clocked at covering over 30 feet per second, which is why he is able to get on base with such regularity.

This speed also helps him greatly with his defensive plays too, as he is quick off the mark when getting to balls that would probably get past most shortstops. Who knows, if he keeps on this path we could well have an MVP on our hands!