The quarter-finals of Wimbledon 2022 are officially set after the last round 4 matches were completed yesterday. And today, we are about to witness the first two quarter-finals for both the men and the women. There are some big names to check out today too, as is to be expected at this stage in the competition. And of course, I have looked at the matches and provided more Wimbledon betting tips for day nine at Wimbledon. 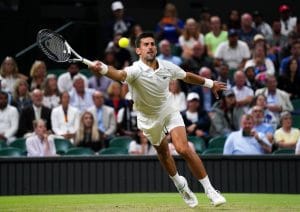 As it happens, with fewer matches being played at this stage than previously, you have to be a little more creative! That’s why some of the betting markets mentioned don’t necessarily follow the standard win or lose options. Then again, by looking at other betting options, you can often find some hidden gems. And below, you can read up on all of my Wimbledon betting tips for day nine!

As mentioned above, there are four matches scheduled today at Wimbledon – four singles matches anyway. Of course, there are also doubles matches. But since they can be a little more unpredictable, it’s better to stick with the singles in terms of betting tips. Of course, I have taken the time to look at the matchups, analyze the head-to-head records, and consider how each player performs on the grass to create my tips. And they are all listed right here:

This is arguably the biggest match of the day out of all the quarter-final clashes. Djokovic will take on Sinner for just the second time in their careers, with Djokovic winning their first game 2-0 in sets. However, this is the first time they will play on grass, and I think that Sinner has a big enough game to take a set. I say this due to his performance in the previous round against Alcaraz, where he just seemed unplayable at times.

I do think that Djokovic will win the match. But at the same time, Sinner to take a set at 1.90 odds seems like great value.

This is the first time that Cam Norrie has made the quarter-final stage at Wimbledon. He is a great player, of course, but I feel that Goffin is a better and more talented ball-striker. I also think that Goffin has had a slightly tougher route to the quarters compared with Norrie. This will make him sharper and more confident going into this match. Norrie also went five sets with Munar earlier in the tournament, who isn’t on the same level as Goffin on the grass, in my opinion.

This is another very interesting game scheduled for today. Maria vs Niemeier is scheduled for Court One. And both of these players are floating around the 100 mark in the rankings. Of course, they weren’t expected to reach this stage in the event, since neither player is seeded. But for me, I have to go with Maria since she has beaten both Ostapeno and Sakkari in the last two rounds.