Saturday, July 9th, is the first of the two finals days at Wimbledon this year. Of course, today is the women’s final, whereas tomorrow is the men’s final. So really, with just one match of the women’s tournament left to go, you don’t need to be informed of where this match will be played! Centre Court will host the 2022 women’s final, and the two players involved are Rybakina and Jabeur. They haven’t had a whole load of history between them, but today promises to be a classic match thanks to the contrast in styles. 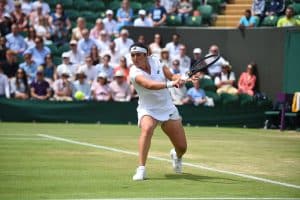 As for the timing of the game, the scheduled start time is 2 pm. The game will actually be followed by the men’s doubles final. So in the interest of covering as much as possible, I will provide details on both matches right now.

Day 13 of Wimbledon – Your Daily Breakdown

At this point in the tournament, there aren’t many matches left to play at the All England Club. However, while there aren’t a load of scheduled games left, these should be some of the most exciting of the tournament to date. I say this because this is the point at which everything is on the line. So the pressure, nerves, drama, and quality of tennis should be more intense than at any other point in the tournament. And below, you will see details on the two matches that are scheduled for Centre Court today.

The main match of the day involves Jabeur and Rybakina, each bidding for their first Grand Slam title. Jabeur is favoured to get the win thanks to her number 2 ranking and overall level of play for the 2022 season. But Rybakina has been impressive throughout the event, hitting huge groundstrokes to make her way past some formidable opponents. The most staggering of all was her destruction of Simona Halep in the semi-final, which nobody really expected.

As for Ons Jabeur, she has displayed some skilful tennis and a serious fighting spirit, especially in the last two rounds. And despite being number 2 in the world, Jabeur has never been past the quarter-final stage of a slam before. So this is brand new territory for both players, which always ensures that the match will be pretty epic to watch.

Following on from the women’s final, we will all get to watch the men’s doubles final. Purcell and Ebden have been the escape artists of Wimbledon this year. They have saved match points in two separate matches to make it through. And in their semi-final, they beat the number one seeds while saving five match points – simply amazing! However, they will now play against the number two seeds in the form of Mektic and Pavic. These guys also won in five sets in the semi-final, so they have been tested.

But believe it or not, they haven’t lost a match together since the French Open back in May. Needless to say, Ebden and Purcell will have to play at their very best to beat this formidable due today.