Alexander Zverev is currently the number 3 player in the world. Of course, this alone shows what a talent he is on the tennis court. He has managed to beat all of the big guys, including Djokovic. And looking at his game, he has a massive serve, big groundstrokes, and he moves well too. For that reason, many tennis fans are understandably baffled at how he hasn’t managed to win a Grand Slam yet. With that said, he has won Olympic Gold, beating Novak Djokovic to make this happen. 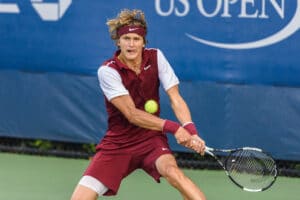 On top of that, he has won the end of year masters title, twice. This includes winning the 2021 event by beating Djokovic followed by Medvedev in the final. Without question, he is one of the best players on tour. So where is Zverev going wrong when it comes to Grand Slam tennis? Let’s take a closer look.

Yes, Zverev hasn’t managed to win a Grand Slam, but he hasn’t exactly done badly in them. He lost in the final of the 2020 US Open, having been 2-0 up in sets against his great friend, Dominic Thiem. He has also made the semi-final of the Australian Open and the semi-final of the French. But getting beyond these hurdles is still eluding him – why?

Zverev himself will probably confess to this being a major problem. In order to win a Grand Slam, it’s all about efficiency, and playing well – of course. That’s how guys like Djokovic have been so successful over the years. He rarely drops sets in the opening rounds, whereas Zverev often does. The more sets dropped, the more time on the court, and the more this impacts energy levels going deep into the event.

Serving problems tend to flare up

I’ve mentioned above that Zverev has a great serve, and he really does. However, his second serve can sometimes become a major liability. He tends to get the yips in tight situations, resulting in double faults and a severe confidence dive. Over the course of a five-set match, this seems to happen with more frequency when compared with three-set matches. And as many tennis players will tell you, you’ll only play as well as you are serving on the day.

That’s because serving has such a huge impact on how quickly you can put games on the board, and how confident you feel on the day.

Getting the job done over five sets

I can highlight the impact of this through a simple head to head with Djokovic. Currently, the head to head for these guys stands at 7-4 in favour of Djokovic. However, all 4 victories for Zverev have been in best of three-set matches. He has never managed to beat Djokovic over the course of a five-set match. Is it fitness? I don’t believe so. I believe that it is a mental hurdle that he needs to overcome to take his first major title.