The 2022 Monte Carlo Masters is now complete. And as we all now know, it was Stefanos Tsitsipas who claimed the title. By doing so, he became one of only two men to have claimed back-to-back Monte Carlo titles in the last 15+ years. The other – Rafael Nadal. Does this put him in a rather unique class of players? Absolutely! I must admit, when he won the 2021 Monte Carlo Masters, I thought it might have been a flash in the pan. 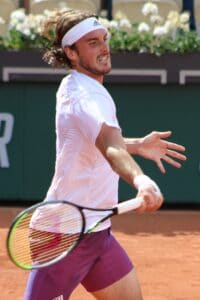 But Stefanos Tsitsipas has laid any doubts to rest here by backing up his 2021 victory with another. With this said, as impressive as his Monte Carlo victory was, there is another burning question that I’d like to address. After winning the title, can we really consider Tsitsipas a favorite to take the French this year?

After all, he did come within a set of taking Roland Garros last year. So could he finally go one step further and win it in 2022? Let’s take a moment to find out.

So – can Tsitsipas win the French Open or not? It’s a question that many tennis fans have right now. And in my opinion, yes, he can. I’ve detailed the justifications for this answer right here:

This is still one of the biggest reasons why I think he can do it this year. Putting aside his performances throughout 2021 and the start of 2022, his previous Roland Garros run fills me with confidence for a successful 2022 campaign. Of course, he made the final of the 2021 event, losing to Djokovic in five sets in the final. Along the way, he also beat one of the top clay-court players in the world in the form of Alex Zverev.

And if I’m being honest, I think the occasion slightly overwhelmed him when he took a 2-0 set lead. But this time around, it could well be different.

When addressing a player’s chances of winning the French Open, it’s critical to look at their game style. With Tsitsipas, he has many of the key ingredients required to take the trophy this year. He has a decent and consistent serve, he can hit heavy on both the forehand and backhand wings, and he has great hands for drop shots and volleys. Tsitsipas is also an incredibly fit player with great agility – again, essential for being a solid clay-court player.

Last but not least, I’ve obviously got to mention the form that he is showing right now. Prior to Monte Carlo, sure, he hadn’t exactly been tearing the ATP Tour apart in 2022. But now that he has managed to win the first clay-court masters of the season, things are certainly looking promising for the young Greek. With that said, I’d still like to see him play guys like Djokovic, Ruud, Nadal (when fit), and a handful of others ahead of the French to see how he does!