Shuai Zhang will lock horns with Coco Gauff on Sunday evening, with both players vying for a spot in the US Open quarterfinals. Cori Gauff is still chasing her first WTA singles title of the year; she came close once, reaching the final of the French Open — her first-ever grand slam final. Unfortunately, the American lost in straight sets to Iga Swiatek. On the other hand, Shuai Zhang has one WTA singles title to her name in 2022, as she came out on top at Lyon in March. Which of these players will emerge victorious here? Let’s find out through this match preview. 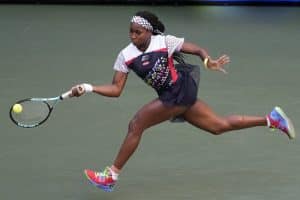 This is unfamiliar territory for both players; as Coco Gauff and Shuai Zhang had previously never made it to the fourth round of this tournament. However, both players are enjoying one of the best years in their respective careers; as Shuai Zhang won one of three career singles titles this year, while the American reached her first ever grand slam final at Roland Garros.

Both players have previously met once, in Miami this year. Cori Gauff won that match 7:6, 7:5.

To be fair, Shuai Zhang has looked excellent in this tournament so far; she hasn’t dropped a single set in three matches, dismissing each of her opponents in less than 90 minutes. However, we would like to point out that these players met in Miami, and Gauff took the match in straight sets. Just like Zhang, Coco Gauff has looked great in this tournament; as she is also yet to lose a set. Considering what happened the last time these players met, we are predicting a similar outcome here, with Cori Gauff winning this in two tight sets.

Shuai Zhang faced some interesting players in previous rounds; she had to go through Jil Teichmann, Anna-Karolina Schmiedlova, and Rebecca Marino in the first three rounds. However, compared to these players, Coco Gauff will be a relatively bigger fish to fry; it’ll be interesting to see if the 33-year-old will be able to avenge her loss to Gauff in Miami.

Coco Gauff is coming off an impressive win against world number 20 Madison Keys; she dispatched her compatriot in just 72 minutes, winning 6:2, 6:3. The teenager had previously defeated Elena Gabriela Ruse and Leolia Jenjean in the first two rounds. Coco Gauff is a great returner; she has 96 combined receiver points in three matches, as opposed to 54 from her three opponents in this tournament. The American must rely on that return game to see her through against a formidable opponent like Zhang.