I like to think I can speak for all tennis fans when I say that we seriously miss Roger Federer from the ATP Tour. The great Swiss has been absent from the tour since midway through 2021. As you no doubt know, Federer has been out with a problematic knee injury. This has caused him to go through several surgeries already, and it seems that he still isn’t out of the woods. Federer is still absent from the tour, of course, but there is now a bit of light at the end of the tunnel – or so we hope! 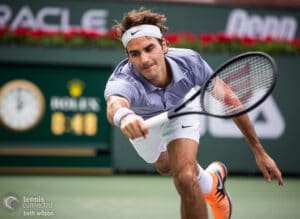 Federer has hinted at a possible return to tennis this summer, which would be awesome for the game, and for him. With that said, there are a few things to pay attention to on the subject, as discussed below.

Could Federer Be Back in Summer 2022?

Let me start with the good news. In a recent conference call with Credit Suisse, one of Federer’s sponsors, he has stated that the knee is recovering well. However, he did state that doctors haven’t really been letting him do much. So although he is now walking around, things will still likely be moving slowly. Anyway, here are the main takeaways from Federer’s recent updates:

While Federer stated he would have loved to say he is back playing, he did say that the doctors are approaching his recovery with caution. Although the path to recovery now appears to be well underway, he does believe that the next few months are crucial. Federer believes that once he has returned to the court in April/May, he can give more accurate updates. This is the deadline really for whether he will say that his 2022 season is a goer or not.

So needless to say, this is a time when Federer fans may want to check up for updates more regularly.

This was perhaps the most inspiring thing about his video call with Credit Suisse. While he couldn’t give too many positives surrounding his injury, he did stress that he was feeling positive about his return. I can remember a few years back when Federer first started receiving questions about retirement. His response – ‘I’ll retire whenever I wake up and don’t feel like playing anymore’. Well, it seems that these thoughts haven’t entered his mind yet. He stated he is still inspired to play, and perhaps even more so after seeing what Nadal has achieved!

Already Back in the Gym

Although Federer hasn’t got back out there on the court, he did say that he is back in the gym. I wouldn’t imagine he is lifting anything heavy, but this alone is great news. Even if he is able to start jogging on the treadmill, this shows that the knee recovery is going well. And the next step from the gym is obviously a return to the tennis court. But we will all need to wait and see when this will be.