We are sure that this will be a duel not to be missed, as both players are in the best moment of their careers. The best of the Tunisian in a US Open had been to reach the second round, while the Russian had never gone beyond the first round, so whatever happens, they have already improved any performance they have done in a Grand Slam.

Jabeur vs Kudermetova Head to Head

In the last three years, the two players have met three times, and each time Kudermetova has won in straight sets. In 2019, Veronika won 6-3, 6-4 in ‘s-Hertogenbosch and then 3-6, 3-6 in Moscow. They had not met since that year until last month when they met in the quarter-finals. In the first set, for the first time, Jabeur made things difficult for Kudermetova, forcing an extra game, but the Russian still won the set.  The second set was easier, and Veronika Kudermetova would win 6-7, 2-6. 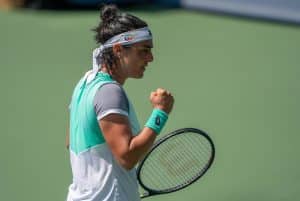 This will be the first time we will see this feature in a US Open it will be the first time in a Grand Slam, which adds to the adrenaline. Each will give their best, as they will rarely be able to repeat what they have achieved so far in this event. To set the right bet for Ons Jabeur vs Veronika Kudermetova, read about our predictions and betting tips for free:

The Russian tennis player has a clear strategy to beat Jabeur as she did in the three h2h. Only six sets have been disputed in three years, and Ons Jabeur has not won any, this shows how difficult it is for the Tunisian to counter the game of his rival. It is possible that Jabeur will do better than in previous meetings, and even win a set, but we predict that it will be Veronika Kudermetova who will reach the quarter-finals.

The first two rounds were very easy for Jabeur, as she faced two players who are above the top 50 in the WTA rankings. On both occasions, the 28-year-old Tunisian brought out her ability to win points on her first serve. In the third round, it was a bit more complicated with the 31st-ranked Shelby Rogers, for the first time Jabeur lost a set in the tournament, but then she was able to win the next two sets. While Ons has 19 break points converted, she has also allowed her opponents to break her serve on 11 occasions, something that will be detrimental against Kudemertova.

The 25-year-old tennis player shows in every round that she is in top form, as she has not lost a set in the whole US Open, not even in the doubles tournament. In the first three rounds she has not come up against any player who represents a real challenge, all her opponents are above the top 50, and all of them she beat in straight sets. Her first big challenge will be Tunisia, whom she already knows very well, and defeated three times. Kudermetova has solved all her matches quickly as she has not allowed her opponents to have break points converted, instead the Russian has converted 10 in total.