The quarter-final match between Novak Djokovic and Rafael Nadal was arguably the most anticipated match of the entire French Open. These two gladiators took to the court for the 59th time in their careers, and the game did not disappoint. Ultimately, Rafael Nadal got the better of his long-time rival and secured his place in yet another Roland Garros semi-final. However, prior to this match, many people, myself included, felt that Djokovic would take him down this year.

Then again – we must have forgotten how much of a battler the great Spaniard really is! In a match where the average set length was more than one hour, Nadal once again showed why he is one of the greatest players of all time. He took down Djokovic with a huge backhand down the line to seal the win in the early hours of the morning, local time. But how did he really take down Novak Djokovic? 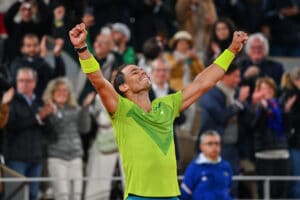 Was it luck? Was it the fact that he just played such sublime tennis? Or was there a bit more to it? I’ve provided a breakdown of the Djokovic vs Nadal match below.

The Reasons Why Nadal Beat Djokovic at Roland Garros 2022

It goes without saying that this game could have gone either way. The match was incredibly tight throughout, but there are still some key areas to look at which truly tell the story of why Nadal got the win last night:

In any tennis match, the first set is always crucial. I say this because it sets the tone for the rest of the game while providing the winner with a key advantage, of course. And during the match last night, Rafael Nadal really did come out of the blocks swinging. Although the games were very close, he managed to take a 6-2, 3-0 lead before Djokovic really got a foothold in the match.

Formidable in the Big Moments

For me, this is perhaps the most pivotal reason why Nadal was able to win yesterday. Starting with the break-points, Nadal took 7/17 compared with Djokovic’s 4/12. Not only does this show that he broke serve a total of three more times than Djokovic, but it shows a break-point conversion rate of 41%. At the same time, he played a fantastic fourth set tie-break to finish the match.

Prevented Djokovic From Dictating Too Much

The fourth and final point I wish to highlight relates to the overall structure of the points. Compared with the semi-final match last year, I don’t feel that Djokovic was able to dictate the points quite as well. Nadal was able to keep him off balance with big forehands and well-placed backhands. And this forced Djokovic to go too big with his groundstrokes, resulting in more unforced errors.

But all in all, it was a great game that Nadal deserved to win.