Wimbledon 2022 did not end as Nadal fans had hoped. In fact, it didn’t end as any tennis fan had hoped when it came to Rafael Nadal. During his quarter-final clash with Taylor Fritz, Nadal was visibly struggling with his abdominals. His serve fell far below 100mph at times, which is far lower than what we usually see from him. On top of this, his forehand lacked venom at certain times as he was unable to rotate through the ball with any kind of force. 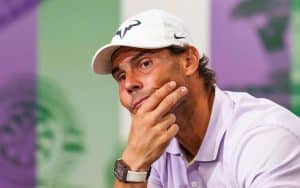 Then again, it’s a testament to the kind of champion that he is when you consider that he actually won the match in five sets. While doing so, he defied his father and his sister, as they were gesturing for Nadal to withdraw from the match. It really was unbelievable to witness, and of course, we all wish Rafa a speedy recovery from yet another injury. On that note, things have been a little quiet from the Nadal camp since he left SW19.

And that’s why I wanted to share some of my research on Nadal’s injury and the potential impact it might have right here.

All You Need to Know about Rafael Nadal’s Injury

As Nadal announced in his press conference at Wimbledon, he has a 7mm tear in his lower abdominal muscles. This may sound pretty small, but I can assure you that 7mm is anything but small when it comes to a muscle tear. Of course, the injury forced him to withdraw from his huge clash with Nick Kyrgios in the semi-finals. But putting the past aside now, I want to highlight the best and worst-case scenarios for Nadal’s injury right now.

By revealing such information, we can gain an accurate idea of what we can expect from Nadal for the remainder of the 2022 season.

Many medical professionals have weighed in on the injury sustained by Nadal at Wimbledon. And because of that, I can reveal the best-case scenario for Rafa moving forward. According to Nadal and his personal doctors, he could be making a return to the court within a few weeks. Nadal himself estimates that he could be back hitting balls in 3-4 weeks. Then again, it’s important to remind you that this is the best-case scenario. Also, hitting balls does not mean that he will be back competing.

It simply means that he may be able to go out there and do some relatively short practice sessions. Of course, the last thing he wants to do is aggravate the injury.

Now that I’ve mentioned the best-case scenario, I must also mention the worst-case scenario. Again, according to experts with these kinds of injuries, it could take anywhere from 3-6 months for Nadal to be 100% fit. That’s because the tear itself has to fully heal before he can exert himself as he would like to. And if anything doesn’t go too well with the recovery, some medical professionals state that he could be out longer than six months.

So really, we all must stay tuned for an official statement from Nadal!