The second semi-final at the 2022 Australian Open has now been confirmed. And boy will it be a blockbuster event! Daniil Medvedev managed to squeak past the young Canadian, Auger-Aliassime in a 5-set thriller. In contrast, Stefanos Tsitsipas was absolutely phenomenal in his 3-0 destruction of the young Italian – Jannik Sinner. There is no denying that Tsitsipas will be the fresher of the two, but who will ultimately emerge victorious? Keep reading to find out!

Russia vs Greece – My Predictions 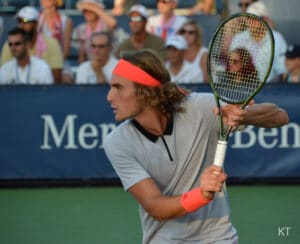 Medvedev is flying the flag for Russia in this one, and Tsitsipas is representing Greece. These two have had a rather spicy history as well, which makes this match-up even more mouthwatering. But taking everything into account, I really do believe that Daniil Medvedev will come out on top for the reasons mentioned below:

Going into this match, Medvedev leads the head to head record by 6 wins to 2. Of course, this shows that Medvedev has come out on top when these two have played each other 75% of the time. But since some of their matches were quite a few years ago, the decision cannot be made solely on this. It’s important to also look at the matches that they have played on outdoor hard courts. Medvedev has managed to beat Tsitsipas on every single occasion when they have played on this surface (outdoors).

And as it happens, the most recent victory on an outdoor hard court came in the semi-final of the 2021 Australian Open. Medvedev managed to beat Tsitsipas in straight sets in this one. So I believe that this will also give him a mental advantage.

It’s pretty clear that these guys have rather contrasting game styles. Medvedev is very much a baseline player who loves to counterpunch where possible. I would even describe him as a bit of a grinder. Although at the same time, he does have a massive serve. In contrast, when you look at the way in which Tsitsipas plays, he hits the ball with heavy topspin, he likes to slice more often than Medvedev, and he likes to attack the net more. While both game styles have proven to be highly effective on the ATP Tour, I still believe that Medvedev’s style is more suited to outdoor hard courts.

To that end, his flat hitting and grinding style of tennis will frustrate Tsitsipas out there on Friday.

It’s not that Tsitsipas isn’t an experienced player, not by any means. This is actually his fourth semi-final appearance at a Grand Slam – his third in Australia. In addition to this, he has also been in the French Open final in 2021. Interestingly, Medvedev hasn’t made as many semi-finals as Tsitsipas. However, he has made three Grand Slam finals in his career, winning his most recent one at the 2021 US Open.

So the fact that he is already a Grand Slam champion, and that he has been in this position at the Australian Open will work heavily in his favour I am sure.