Daniil Medvedev – the world number two in the world, one of the most promising prospects for the future, and a formidable opponent for anyone. Of course, many know Medvedev as the guy that ended Djokovic’s chances of the Calendar Slam in 2021. However, I feel that there is another element to Medvedev that many are missing. From what I’ve seen, he has an interesting approach to the game of tennis from a mental standpoint. 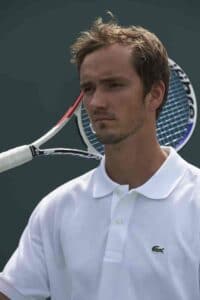 But as whacky as he can be, I believe his mental strength is actually one of the best in the business. His recent match against Nick Kyrgios at the Australian Open cemented this belief. Medvedev won against Kyrgios in one of the most hostile on-court environments I’ve seen of late. This can’t have been easy, and there are a few standout factors I’d like to mention on this topic.

There are quite a few mental giants in the men’s game. But people will often talk about guys like Nadal and Djokovic when using this adjective. However, Medvedev is pretty much in the same category in all honesty. Here’s why:

In His Own World

When you watch a Medvedev match, to say that he is in his own world would probably be the understatement of the year. He has some comedy arguments with fans and umpires, his personal chat is highly amusing, and some of the things he does on the court are just baffling. But to tell you the truth, I don’t think he even realizes whether his verbal and physical actions are picked up by the external world. At times, he seems so in his own world that it’s amazing he can focus on a match.

But I believe that this actually helps him to avoid worrying about external factors, in a very, very unique way.

The first time I recognized that Medvedev actually adores crowd pressure is when he played Nadal during the 2019 US Open final. The whole event, the crowd was getting on his case, but he seemed to love it. And in the Kyrgios match, yet again, he showed that he somewhat enjoys the crowd being on his back. They were even booing the guy at times, yet this just seems to spur him on even more. He is a bit like Djokovic in that regard. He just seems to play his best tennis in the face of adversity.

Doesn’t Care if He’s Loved or Not

Having watched Medvedev’s development over the last few years, I can genuinely say that he doesn’t care less whether fans, players, or the umpire like him or not. During the Kyrgios match, he didn’t seem to bat an eyelid when the crowd was booing, jeering, or applauding him. He has even had the cheek in the past to say to the crowd that the more they boo, the more he will win – ‘for them’.

Of course, this is not a genuine statement from Medvedev. But it sure gives us an insight into his mindset for the game.