Maxime Cressy is a name that many fans have been speaking about of late. And to be honest, this is with good reason. He first started to gain a bit of traction in the rankings at the beginning of 2022. I say this because he made the final of Melbourne prior to the Australian Open. Then, in the Australian Open itself, Cressy made the 4th round before losing to Daniil Medvedev – not a bad loss! And now, as the grass court swing comes to a close, Cressy is still popping up time and time again with huge results. 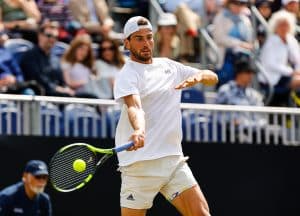 Cressy lost out to Taylor Fritz in the finals of Eastbourne, one of the warm-up events for Wimbledon. Then at Wimbledon, he dispatched one of the main contenders in the form of Auger-Aliassime in the first round. Bear in mind the man is still just 25 years of age too, so he has plenty left in the tank. And just last week, he won the ATP 250 event in Newport. He beat Bublik in the finals and beat America’s number three, John Isner, in the process.

So really, his journey over the last 6 months begs the question – can he become the new American number one? Well, let’s find out.

Cressy – The Next Big Thing for American Tennis

At the time of writing, Maxime Cressy is ranked number 33 in the world. This is an enormous jump from where he was even 12 months ago. In fact, he was mainly playing Challenger events back then. But now, he is an established player on the ATP Tour. And for me, I truly think he can become America’s number one. Here’s why:

Cressy has the typical game style that we have seen in American tennis over the years. He has a big serve, a huge forehand, and the backhand is certainly his weaker side. But this game style makes him dangerous. He is one of those guys that when he is on, he can cause some issues for just about anyone out there. Then again, he could do with improving the backhand and his net game before he can take the top spot.

Performances in Majors to Date

For me, his breakthrough really came at the Australian Open this year. He made the 4th round, as previously stated, and he showed that he has what it takes to win on the big stage. Bear in mind the first slam that he played was 2020! And while yes, he didn’t do great at the French Open or Wimbledon, he did beat Auger-Aliassime in his opener at Wimbledon. This was his first win against a top 10 player. So all in all, we should watch out for this guy.