Since winning the 2022 French Open, some big questions have remained unanswered with Rafael Nadal. But the most prolific of them all is whether he will be playing in Wimbledon or not. As recent weeks have rolled by, speculation has been fuelled by both Nadal himself and his well-documented foot injury. This is because he revealed that for the French Open, he was receiving pain-relieving injections on almost a daily basis just to compete. 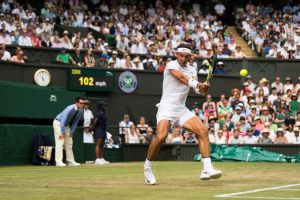 Nadal stated that this is something he was not willing to do for Wimbledon. However, promising signs have emerged in recent days that show that he has a good chance of being involved in the 2022 Wimbledon Championships. Of course, he is on the entry list. But there is more to the story than that, which I’ve revealed right here.

At 36 years of age now, we won’t see too many more years of Rafael Nadal on the ATP Tour. As sad as that sounds, this is simply the reality. So of course, we’d all love to see him competing at the All England Club next week. And personally, I believe that there is every chance that Rafael Nadal will be playing at Wimbledon. Here is why:

He Has Been Practicing on Grass in Mallorca

As you may already know, there is a grass-court event taking place in Mallorca at the moment. Nadal might not be involved in the event, but he has been hitting on the courts. This shows that he is at least testing out his foot ahead of the 2022 Wimbledon event. Sure, we can’t read too much into the fact that he is hitting on the grass. However, if his foot really was that bad, I doubt that he would be out there playing at all.

And as he has stated in a recent interview – if he can play tennis without limping, then he has every shot at competing at Wimbledon. So since he is practising, I’d say he is doing much better than walking with a limp!

This might not be viewed as a key factor by some, especially since it has nothing to do with his foot injury. However, I believe that this fact will actually have some significance over whether he chooses to play or not. Again, the fact that he is 36 means that time is running out for the great Spaniard. And given that he last competed at Wimbledon in 2019 must make him hungry to get out there for at least one more time.

Claims That Early Signs Are ‘Promising’

Coming back to some recent interviews that Nadal has given over the last few days, he states that things are looking promising. He has also said that he certainly plans to travel to Wimbledon a few days before the event. From there, he will see how things go. But the injury has been okay during his practice sessions, so fingers crossed – things will stay that way as the following days progress.