The 2022 Australian Open gave us one of the biggest stories that tennis has seen, arguably over the last 20 years or so. Of course, we all know that Djokovic was deported from Australia and banned from competing. His stance on the COVID vaccine has been a subject of huge controversy. But needless to say, he made a return to the tour in Dubai last week. This comeback was highly anticipated, for obvious reasons. 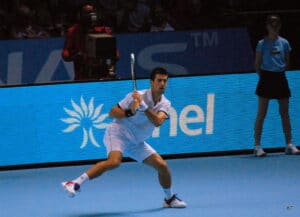 During the tournament, he managed to beat both Musetti and Khachanov, in impressive fashion I might add. Especially against Khachanov, it seemed like he was just as sharp as ever. However, a magical return wasn’t to be, and he lost to Jiri Vesely – a man in the form of his life. This has led many people to ask the question, is Djokovic the same since his absence from the ATP Tour, or is he now on a slippery slope?

I’ve provided my two cents on this matter below.

In my humble opinion, the loss to Vesely was a bit of a freak event. And in all honesty, it can’t be very easy to come back to the tour after several months and just pick up where you left off, so to speak. But for me, although Dubai didn’t go as planned, I expect his season to be fairly spectacular for the following reasons:

Officially Behind in the Slam Race

If we put his form aside for a moment, there is one thing I have to point out. Throughout his career, Djokovic has always been a bit of a gladiator when his back is against the wall. And with Nadal edging ahead in the slam race, I feel that his efforts will be doubled to rise back to the top on the ATP Tour. Adding to this, he has been quite vocal in recent times about how he wants to focus on the slams above all else.

So the fact that he lost in a 500 event shouldn’t be too much of a concern for Djokovic fans.

Loss of World Number One Ranking

Although he lost in Dubai, which can happen to anyone, this one has to be hurting him the most. After losing early in Dubai, Medvedev now has more points than him in the rankings. This means that he has now lost the number one ranking. Of course, the fact that he won Australia in 2021 and then didn’t compete this year hasn’t helped matters.

Looked as Sharp as Ever

The final point here is more my opinion rather than factual. But having watched him in the first two matches, he seemed quick, fit, and he was striking the ball well. There were signs that he was playing just as good as he was at the back end of last season. Sure, he probably wouldn’t be described as ‘match tight’. But this will ultimately change, assuming he gets to play a range of tournaments.

On that note, for me, Indian Wells and Miami will be huge for Djokovic’s season!