Iga Swiatek will lock horns with Jule Niemeier on Monday, as both players vie for a place in the quarterfinal of the US Open. Niemeier hopes to match her best performance in a grand slam, after her impressive quarter-final berth at Wimbledon. On the other hand, Swiatek will be eyeing her third grand slam title, and her second this year. Will Niemeier pull off the biggest upset of her career here, or will it be business as usual for World number 1? Let’s take a look at both players’ chances

Iga Swiatek has been the most dominant player on the WTA tour this year; she has a 53-7 win/loss record, with 31 wins and 5 losses on hardcourt. That’s an impressive 88 percent win rate across all surfaces. The Pole won six WTA titles this year, including a grand slam title at Roland Garros. Although Niemeier hasn’t had nearly as much success as her opponent, she’s enjoying the best year of her career. The German surpassed her performances in all grand slams this year, making it to the top 100 for the first time 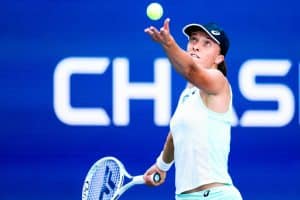 These players have never met before; which is no surprise considering Jule Niemeier has mostly played on the Challenger and ITF circuits.

Swiatek to win in straight sets

To be fair, Jule Niemeier knocked out all her opponents in straight sets, including an impressive win over Sofia Kenin; however, she’s going up against the most dominant player on the tour. We would like to point out that Iga Swiatek broke her opponents 14 times across three matches; she has not dropped a single set in this tournament. That being said, anything other than a straight sets win for Iga would be a surprise

The 21-year-old player is coming off a 6:3, 6:4 win over Lauren Davis; she previously knocked out Jasmine Paolini and Sloane Stephens in the first two rounds. The Pole is one of the best returners on the WTA tour; she has a total of 94 receiver points, as opposed to a combined 56 from her three opponents. Furthermore, all three opponents are ranked higher than Niemeier, so World number 1 shouldn’t have too much trouble here.

The German player defeated Sofia Kenin, Yulia Putintseva, and Qinwen Zheng in the first three rounds. It’s worth noting that the German hit just about as many aces as double-faults in those matches; indeed, this should be cause for concern as she faces a great returner like Iga Swiatek