The first round of the US Open matched two players of great level, although Raducanu part as favourite to win this feature, Cornet has the qualities to leave the current champion out, what will happen in this duel? To set the right bet for Emma Raducanu vs Alize Cornet, read about our predictions and betting tips for free: 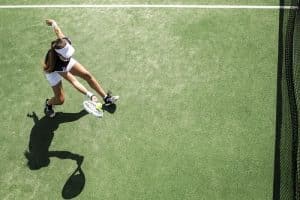 In this duel, we will see the boldness of a daring young woman who is only 19 years old, but who already knows what it is to win a US Open against the maturity and experience of the French tennis player. We think that the British tennis player will come away with the win in this one, since her physical condition is optimal, on the other hand, her rival does not have the same physical condition as in her best years.

Although the Frenchwoman has more than 15 years of career as a tennis player, she never won a Grand Slam, while Raducanu won the US Open in the year she debuted as a professional. Due to Raducanu’s short career, this will be the first time that the British and the Frenchwoman will face each other, so there could be surprises.

The young tennis player begins her journey to revalidate her previous title, the surprise factor will no longer be one of her tools, but her forcefulness. It has only taken her a little more than a year to enter the top ten of the ranking. As the defending champion, she is obliged to win the championship if she does not want to lose the points she won in the previous edition.

This year has not been very good for the representative of Great Britain, because, unlike the previous year in which she won most of her matches, and advanced to many rounds in different tournaments, now she has been quickly dismissed from the tournaments in which she has participated.

We are probably witnessing the final years of Cornet’s long career, the Frenchwoman has never won a Grand Slam and will do her best in her final attempts. All expect Cornet to repeat her Wimbledon performance, in which she reached the round of 16 just after defeating No. 1 seed Iga Swiatek. After that, the Frenchwoman became one of the favourites to win at Wimbledon but immediately fell to Austrian Ajla Tomljanović.

After her success at Wimbledon, her results have not been the best, dropping out of tournaments in the first or second round. Since then, her best performance was at the WTA Cleveland, where she reached the semi-finals and lost 2-1 to Belarusian Aliaksandra Sasnovich. The 32-year-old’s experience will be crucial in boosting her chances of success in the first round of the US Open.

The Frenchwoman has been a little better than her opponent in recent weeks, however, Cornet tends to have some drops in level when the match is demanding and fast. That is why the youth and boldness of the young Brit is a factor that will be more determinant in this first-round feature. Hopefully, the predictions will be right and Rodanocu will reach the next round, but not very easily.