This has been a topic of serious debate for quite some time now. In fact, talks opened up a number of years ago about changing the status of Indian Wells. Of course, the talks were conducted with the intention of making Indian Wells a Grand Slam level event. Currently, nothing has actually come to fruition on the issue. But the overall debate is still ongoing regarding whether the tour would benefit from a 5th Grand Slam. Right now, we have the Aussie, French, Wimbledon, and the US Open. However, the Aussie is played in January, the French in May/June, Wimbledon in June/July, and the US in August/September. As you can see, the tournaments are fairly spread out. So in my opinion, the tour definitely has the space for another slam to be played. However, would the tour benefit from making such a move?

It might sound simple to change the status of an event like Indian Wells, but things aren’t quite that easy. There are certain logistics that must be figured out, and at the same time, the tour needs to consider whether this would be a sustainable move going forward. So without further ado, let’s discuss the main points.

It goes without saying that Grand Slams pull in the most revenue of all the tournaments. This is critical for the WTA and ATP Tours to continue running as they are. And at the same time, these revenues drive expansion for both tours, and additional funds are distributed into other areas as the tours see fit. Should an additional slam be added, this would obviously add an extra 25% to the bottom line for these organizations. That’s if we assume that the 5th slam would be equally as successful as the others.

As a tennis player and fan, I follow most of the events on tour. But if you think about this question from a non-fan perspective, the answer is obvious. Non-fans are only likely to tune in for the highest level of competition – the Grand Slams. With that said, non-fans might only tune in for a Grand Slam if it is based in their own country. This then limits the potential fans to just 4 countries. If a 5th slam was to be added, this provides yet another opportunity for people to get interested in tennis.

I would go a step further on this, however, and state that a 5th slam should be held in a different country from the current 4.

As things currently stand, the Grand Slam structure is a little unfair for some players. Of course, two out of the 4 Grand Slams are held on hard courts. One is on clay, and the other is on grass. This means that unless a player is good on hard courts, they’re already written off for 50% of the major events. But as for the surface that the 5th Grand Slam could be held on, that is a debate for another day.

In conclusion, I believe that yes, the tour does need a 5th slam. And I truly believe that this would help the game of tennis massively. 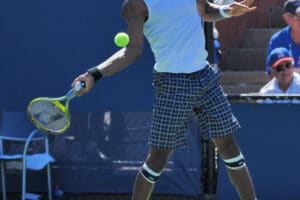