Two days ago, Novak Djokovic won Wimbledon against Nick Kyrgios. This match really did live up to the hype, in my opinion. Kyrgios played a sublime first set before Djokovic did the usual – come out and raise his level almost instantly. In a four-set thriller, Djokovic took the title, earning his 21st Grand Slam. This slam win puts him beyond the great Roger Federer, who has 20 Grand Slams to his name. 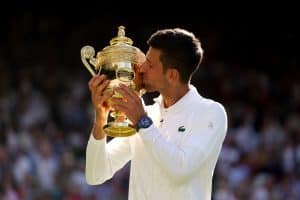 And let’s be honest, it’s not looking likely that Federer will win another, as much as that hurts me to admit! As for Rafael Nadal, he still has some life left in him, and he is winning the Grand Slam race with 22. Taking this into account, I believe that the Djokovic victory on Sunday has re-lit the GOAT race.

I’d like to highlight some of the more exciting reasons why right here!

Wimbledon 2022 and the GOAT Debate

This year’s Wimbledon was certainly different from many others. Of course, Wimbledon was stripped of the official ATP and WTA points. At the same time, players from Belarus and Russia were not allowed to compete. However, it was still a Grand Slam, and the tennis was as entertaining as ever. But back to my focus here, the fact that Djokovic won the title has put the GOAT debate back on the tongues of many tennis fans. Here’s why:

As I am sure you know, Rafael Nadal snatched the first two Grand Slams of the year. This put him two slams ahead of both Djokovic and Federer. And for many, this solidified Nadal as the GOAT based on slam wins alone. But Djokovic has now moved to 21 slams, which puts him within one slam win of Nadal. I think it’s important to mention the elephant in the room too – Nadal’s injuries and his body.

It seems he is getting injured with new things constantly, whereas Djokovic seems as supple and as healthy as ever.

Amazingly, this was the 7th time that Novak Djokovic has won Wimbledon. This puts him level with Pete Sampras, and it puts him within one title win of Roger Federer. Even more impressively, next year he gets a chance to repeat what Federer achieved all those years ago. He will get a chance to shoot for five Wimbledon wins in a row, which is something that only Bjorn Borg had achieved prior to Federer.

Djokovic has actually beaten Federer in three of those Wimbledon wins too, which paints a picture.

There is still one thing hanging over the head of Djokovic in terms of the GOAT debate. Due to his stance on the COVID vaccine, he may still not be allowed to compete at the US Open later this year. And because of his deportation in Australia back in January, he is currently facing a ban from the country. Unless things change on this front, you’ve still got to favour Nadal to move further ahead of Djokovic.

But if things do indeed change and Djokovic can compete in these events, I feel it’s undeniable that he will take the GOAT title from Nadal.