Over the last 24-48 hours, the tennis world has been rocked by the news of Ash Barty’s retirement. She is a player that had it all – talent, charisma, and she was loved all over the world. And let’s not forget, she is currently ranked as the world’s best player. Over the last 18 months, she has won Wimbledon, the Australian Open, and she has solidified her spot on top of the world. 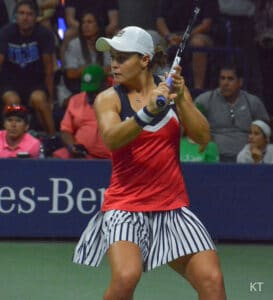 So when news broke that she was hanging up her rackets, fans were understandably in a state of shock. This is the second time that Ash Barty is retiring from the game, but this time feels very different from the first. Below, I’ll be discussing the main points regarding her retirement as well as some things you may have missed.

It’s always a sad day when one of the game’s greats decides to call it a day. I’ve seen it many times with Sampras, Agassi, and so many others. But in the case of Ash Barty, I really didn’t see this one coming. She has decided to retire at just 25 years of age, which is incredibly young, and she is clearly in her prime. However, facts are facts, and this is why she is moving onto another phase of her life:

In the recent interviews that she has given since the announcement, this one stands out as one of the main reasons for retirement. As a little girl, Barty dreamed of winning Wimbledon, which she has now done. Of course, winning her home Grand Slam in January was also the icing on the cake. So for her, she feels she has achieved everything that she set out to achieve in the sport.

I must admit, I was somewhat surprised at this point. But the more I think about it, the more it makes sense. She acknowledged the drive, commitment, and underlying motivation required to keep at the top of the game. And I do indeed understand that it must be hard to keep the same fire burning when you’ve achieved all you wanted to. This has been seen time and time again throughout tennis, and we’ve lost many legends because of this.

Being from Australia, Barty must only return home a handful of times throughout the year. She is constantly touring and competing, and she is often away from home for months at a time. Barty is certainly a homegirl, and she loves Australia, as well as her friends and family, of course. And it seems that the time spent on the road has now taken its toll.

Again, in her interviews since announcing her retirement, she says she wants to chase other dreams now and pursue other ambitions. What exactly are these? Well, I’m not too sure, but I know that Barty is an avid sportswoman. So I wouldn’t be surprised if she started competing in other sports that are popular in Australia!