If you tuned in for the Paris Masters last week, you’d be fully aware of what happened to Carlos Alcaraz. But in case you missed it, Carlos Alcaraz was forced to retire during his match against the eventual winner, Holger Rune. At the time of his retirement, he was a set down and he was losing the second set tie-break. I don’t say this to claim that he retired because he was losing the match, as this would be the complete opposite of the truth. I say this purely to emphasize the circumstances of his retirement at the Paris Masters. 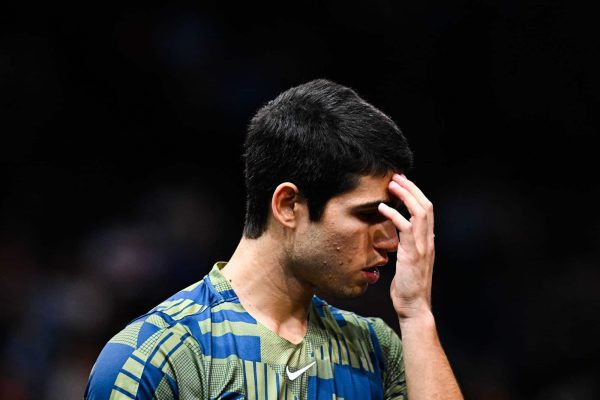 Since the withdrawal, Alcaraz has obviously had time to get his injury assessed by medical professionals. And sadly, it isn’t great news. Alcaraz has suffered the exact injury that Rafael Nadal endured earlier in the season. To clarify, this was an oblique muscle tear in his abdominal wall. As he received treatment on court against Rune, it was clear that this was on the left side of his abdominals.

And while Alcaraz hasn’t yet given specifics as to the significance of the tear, he has given an update for his fans. Much like Nadal, his recovery could take somewhere in the region of 6-8 weeks to fully heal. Of course, this has consequences for the remainder of his 2022 season too, which I shall cover right now.

That’s right – Alcaraz will take no further part in the 2022 season. This is a real shame as 2022 has been the season where he has clearly broken through and shown the tennis world what he can do. In 2022 alone, Alcaraz won his first Grand Slam, he became the youngest world number one of all time, and he won two Masters 1000 titles. Needless to say, that’s a pretty incredible season by anyone’s standards.

Yet as you can see, this injury has put a premature end to his competitive season. Here’s what you need to know:

Withdrawal From ATP Finals in Turin

Carlos Alcaraz was one of the first guys to qualify for the End of Year Finals in Turin. This tournament is scheduled to begin next week. So of course, it is simply impossible for Carlos Alcaraz to take part. Being the world number one, this means that the top seed is now out of the event. And his withdrawal has also allowed Taylor Fritz to compete in Turin, which I am sure he is grateful for, even if he would prefer that he qualified under different circumstances.

For me, this is the biggest shame of them all, as it would be the first time that Alcaraz would be competing in the ATP Finals.

No Part in Davis Cup for Spain

Another huge event that Alcaraz was due to participate in is the Davis Cup. Spain made it through their group, which means that they are in the quarter-finals at the end of November. And if they were to win against Croatia, this would mean a potential semi-final and finals appearance too. But unfortunately, Alcaraz will take no part in these fixtures, which is a major blow to Spain.