As tennis fans have anticipated for quite some time now, finally, Alcaraz was able to overcome the master. In the Madrid Open yesterday, Alcaraz managed to beat Rafael Nadal in three sets to take his first win over the clay-court legend. It was a bit of a blockbuster performance from Carlos Alcaraz. And despite turning 19 just a few days prior, he really did put on a performance that was worthy of an experienced and fully developed man. 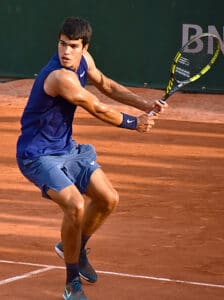 With that said, Nadal fans will obviously lean on the fact that this is his first tournament back from injury. So was he fully fit and playing at his best? Potentially not. Then again, the fact that Alcaraz has now been able to beat Nadal is a huge mental victory for the Spanish youngster. Nadal is arguably the greatest player of all time, and prior to his game with Alcaraz yesterday, he had lost just one match all season.

So of course, this is a huge moment for Alcaraz, and it’s one of his most impressive victories to date. However, we cannot pretend that this victory hasn’t raised a very important question in men’s tennis. Does this victory symbolize a changing of the guard? Here are my thoughts.

The Win That Has Changed the Game as We Know It

It’s not just the fact that he has managed to overcome Nadal that makes this so significant. It’s the fact that he has been able to do it on the clay of all surfaces. Coming through with such a win against the best clay-court player of all time is obviously a monumental achievement. And personally, I feel that this potentially marks the beginning of the end for the remaining ‘big two’. Here’s why:

Alcaraz Will Only Get Better

The sad truth of this victory, for Nadal, is that Alcaraz is still in the very early stages of his career. At 19 years of age, he is already striking the ball like a man. And his power, agility, and overall tennis level will continue to improve over the coming months and years. As for Nadal, it’s natural that his game will not improve at the same rate as such a youngster.

The Physicality of the Game

Speaking of agility around the court, one of the standout factors for me in the game yesterday was just how physical Alcaraz made it. He seemed so full of energy, charging down every ball and putting Rafa under so much pressure that I just felt he had an extra step or two over Nadal at all times. Of course, the physicality of the game will continue to get more extreme too.

The Importance of the Djokovic Game Today

I’ve stressed above that I feel this is a changing of the guard in terms of Nadal’s dominance over the tour. But today, we have another chapter of the changing of the guard process. If Alcaraz can beat Djokovic today, I really do feel that the era of the greatest players ever is over. However, we will all have to strap on our seatbelts and see what today brings before we can make any concrete statements on this!